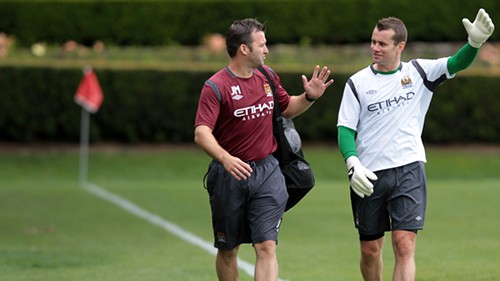 It just so happens that one of the best soccer teams in all of England is starting their pre-season training in the lush confines of Nike's world headquarters out in Beaverton. It is a team that was one win away from making the illustrious Champions League. A team that sits in the shadow of a far more famous cross-town cousin but with a ridiculous infusion of cash, has built itself into a true powerhouse. This team has players like fresh-from-the-World-Cup members such as England international Shaun Wright-Phillips and Cote d'Ivoire's brother tandem of Kolo and Yaya Toure, along with Ireland goalkeeper Shay Given (Erin Go Bragh!), and former French captain and 1998 World Cup champion Patrick Vieira. They are loaded with talent and potential. Oasis' Liam and Noel Gallagher are huge fans. Their crowd loves to sing an anthemic rendition of "Blue Moon."

This team is Manchester City.

And they intend to play the Portland Timbers tomorrow at Merlo Field on the University of Portland campus at 7 p.m. It is a game that is certainly the most difficult and biggest of exhibition friendly the Timbers have ever played. Tickets are scarce as they were only distributed to 2010 season ticket holders and a recent scan through Stubhub was fruitless. However, you may possibly find someone out front of the match looking to unload one.

If you manage to get in, you will not only be witness to one of the stronger teams in the English Premier League but also get to see it on one of the nicest and most intimate soccer pitches in North America. If you don't make it in, you can still follow along on Sportsradio 95.5 The Game and in Spanish on 910AM+1390AM ESPN Deportes as well as watch a video broadcast via the internets.

While the Timbers have been playing some of their best soccer of the season and The Blues are just getting their legs warmed up on the beginning of a U.S. preseason tour, a victory for Portland would be shocking. Also, it remains to be seen how many of City's starters will play and for how long. However, it should prove to be a memorable match.

To see Man City in action this week training at Nike, check out some of their videos here and playing with kids here.

Over 200 City, County Employees Poised to Lose Their Job Monday Over Vaccine Mandates