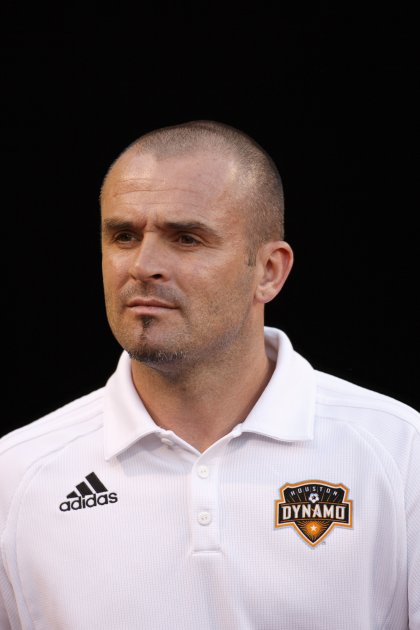 The Portland Timbers announced this morning what many in the soccer world had assumed for some time now, namely that John Spencer will be the team's new head coach beginning with their inaugural Major League Soccer season in 2011.

While this is Spencer's first head coaching gig, he comes to town with a long and distinguished playing career as a striker with Glasgow Rangers in his native Scotland, also Chelsea in the early 90's—where "Spenny" was a fan favorite—and later captaining the Colorado Rapids in MLS. Most recently, Spencer was the assistant coach with the Houston Dynamo helping lead them to back-to-back MLS Cup championships in 2006 and 2007 and four consecutive playoff appearances, including a run to the Western Conference finals in 2009. Soccer By Ives—one of the leading U.S. soccer news blogs called him, "one of the most highly-regarded assistant coaches in the league." As a fiery Scotsman, Spencer has been also known to say things like this. (No. Not really. I made that part up. But he is fiery.)

Current head coach and technical director Gavin Wilkinson will continue with the team but focusing solely on technical directing duties with the jump to MLS. A formal press conference will be held tomorrow and I will relay what I hear from there.

ALSO. It is sad to say but this will be among my last posts for the Portland Mercury as I move on to new opportunities. I have enjoyed my time with the lovable, memorable and passionate folks here in Mercuryland and think that somehow, somewhere, they'd all make a formidable, if not downright delightfully colorful, starting XI.

HOWEVER, if you would like to pick up the reigns and continue where I left off, then today is your lucky day. The Mercury is looking for an able—if not more talented—replacement. With the Timbers returning home tomorrow night to take on the NSC Minnesota Stars, it is a perfect chance to write up your own take on things and email it to this guy and see what happens. I tell you from experience that the world of a Timbers Portland Mercury Blogtown blogger is filled with exciting soccer matches, press passes, occasional free food, and beautiful summer nights. It's a rough-and-tumble life . . .