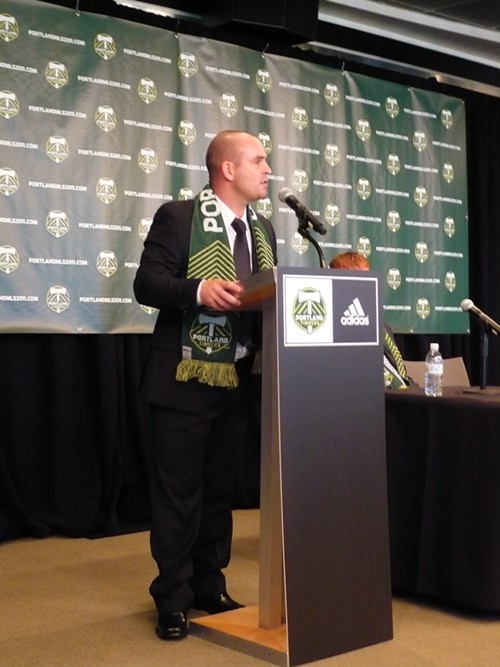 The Portland Timbers held a press conference this morning at the Adidas America HQ in North Portland to formally introduce new head coach John Spencer. To be clear, this was not an announcement of Blues Explosion reformation or a tribute to the late great actor that played Leo McGarry on THE WEST WING. No. This is all about the very charming and highly touted Scotsman who will be taking over the head coaching reigns as the organization moves on to Major League Soccer next year.

More quotes, a few photo snaps, and my farewell after the jump . . .

In a friendly and convivial atmosphere, it was clear that the Timbers very much have their man. Owner Merritt Paulson talked about how he and Technical Director Gavin Wilkinson met with many candidates—"several that were reported on, many that were not"—and spoke with lots of other experts from various leagues and levels. The name that kept coming back up was "John Spencer." While Spencer certainly has the bonafides with his playing career in Europe, it was more important that he knows the MLS intimately. As Paulson put it, "That was a priority for me. Bringing in somebody that knows this league. You know a lot of coaches have come in with big names who have underestimated Major League Soccer and haven't been successful."

[Side note: If you want to read how not to coach a team with a big name foreign coach, read Grant Wahl's THE BECKHAM EXPERIMENT to see how Dutch legend Ruud Gullit came in and made a mess of things.]

Spencer is quite charming and clearly chomping at the bit. He spoke of the need for the team, "to win right from the off." His ideas about how to build the squad are still clearly forming but he mentioned that in regards to the current Division 2 version—who happen to take on NSC Minnesota Stars tonight at PGE Park at 7 p.m.—that, "I think the guys on the team right now are in sole positions of the jerseys and I told them yesterday, don't let anybody take the job away from you." How many of them will remain with MLS kickoff next season remains to be seen, but it is interesting to note that he's open to giving everyone a shot.

When asked about the Designated Player option—a player not counting towards the team's salary cap (see the Galaxy's David Beckham or New York's new shiny Thierry Henry)—Spencer said, "I don't think it's the first box we need to check on this list. I know the fans are desperate to get a big name signing. I think it's important that we get everything right. Get the foundations of the club right first and get us on the right track. And then if the right player comes up, the funds will be made available to sign him." 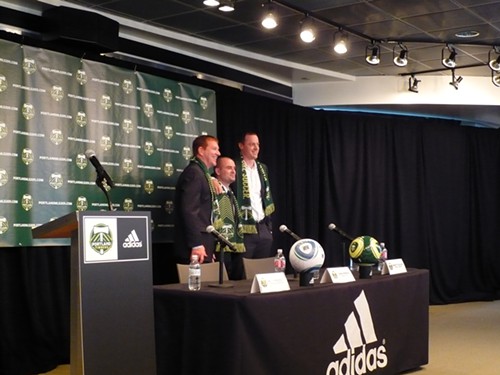 Clearly, Spencer is a coach who cares deeply for his players with his philosophy being summed up by Dominic Kinnear—his mentor and head coach with the Houston Dynamo. "He said to me one day and it was a tremendous quote, he said to me, 'I treat these players like I'd like my own son to be treated.'" Spencer continued, "It's a tremendous way to look at your players and let them know you care about them."

You can see that too in the way he sticks up for his players. Spencer was fined earlier this season for famously making an obscene gesture towards L.A. Galaxy fans as they mocked Dynamo and U.S. national team striker Brian Ching for not making this summer's World Cup team. As he put it, "I think when you have a love and a passion and a commitment to your players the way I have . . . for me sometimes you cross the line for them; for the ones that you love. You know, Brian Ching thanked me afterwards, said it was a great gesture, and I said to him, 'Is there any chance you could pay that $2,000?' He says 'No.'" This brought laughter across the press conference room. 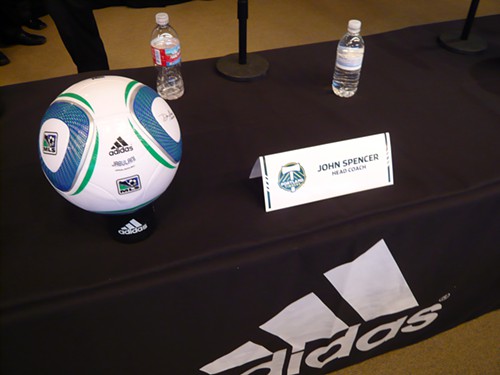 Without a doubt, this is a guy who gets it and is very excited to get to work.

And with that, my dear Blogtown Timbers Readers, I bid you all a fond adieu. Thanks goes to Steven, Ezra, Alison, Erik, Marjorie, and all the fine Mercury folks for letting me come in and play with your toys. You are all very good sharers.

Also, don't forget, show off your Timbers/soccer/awesomeness writing chops to this fine gentleman. They're still looking for a replacement to keep the Timbers news a'rollin'.

Over 200 City, County Employees Poised to Lose Their Job Monday Over Vaccine Mandates