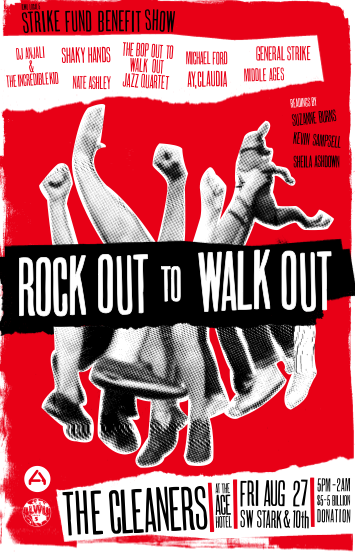 Portland landmark Powell's Books is one of the few bookstores in the country with a unionized workforce—the roughly 400 bookslingers, book packers and general book lovers who work at Powell's formed ILWU Local 5 in 1999. Since then, the union has negotiated three contracts, including one in 2003 that led to a Black Friday strike. This month, the union is celebrating its big 10th birthday with "Rock Out to Walk Out", a concert of Powell's employee bands raising money for a strike fund. Though no strike is currently planned, negotiations start on a new contract next summer and, as union board President Ryan Van Winkle explains, it pays to be ready.

Q: What's this Rock Out to Walk Out about? Are you guys going to go on strike?
It's not like we're doing this because we intend to strike, it's just a good idea for preparing for the future. It's a celebration of Local 5's 10th birthday, it's of course a fundraiser and it's also a release party for an album that has been compiled with a bunch of Powell's employees who have come together with their bands to reinterpret old union songs from the 20s and 30s. We've produced this album called, "The Little Red Album," which is an homage to the Little Red Songbook. [Check out the MP3 of one of the Powell's employee band songs below the cut!]

Q: So what's your job at Powell's?
I work in the Gold Room of Powell's, that's the SciFi room. As a SciFi fan, it's pretty cool to be working in the largest's SciFi bookstore in the state. We get all kinds of people, looking for all kinds of things from the obscure to the mundane.

How do you feel about working there?
I was born in Oregon and my family moved to Beaverton in 1997, when I was in the 7th grade. I pretty much lived at the Beaverton Powell's, I was just an avid reader. When I got a job at Powell's, it was just awesome.

Q: What are the big issues you guys in the union deal with? What sparked the union to form in the first place?
The biggest issues really boiled down to trying to protect our healthcare. Also, there had also been a wage freeze for the two years before I started, no one was getting raises even thought the company appeared to be doing very well, so well that they began this enormous expansion. There was plenty of money to plan a four story tower on the corner of 11th and couch, but there was no money for raises. People also felt like they had no control at work, like they went from being booksellers intimately involved with the bookselling process to sort of shelving monkeys. As Powells got bigger and bigger, it started to step further and further away from a mom and pop operation to a much more corporate-minded organization.

What have negotiations been like in the past?
Our first contract took 14 months and it was very contentious, our second contract took 11 months and was very contentious. Our third contract took like four months, it was really smooth. I think Powell's as an organization got more comfortable with dealing with us and Local 5 as an organization got more savvy about how to deal with the company. Contention isn't fun, we don't get a kick out of it. Everyone who works at Powell's more than just likes working there, we're really committed to seeing the company succeed and thrive. Unrest is something we'd like to avoid.

How is the business doing? Do you think the negotiations next year are going to be rough because the book business in general is hurting?
We don't get straight numbers from the company, that's their information that they don't share with anyone. I just have my experience from the store, and this month it's been super crazy. Super busy.

But Powell's is a unique entity in the book biz, there's not really anything like it anywhere, so comparing Powell's to the book industry is sort of an apples to oranges comparison. The Portland community has been super supportive of Powell's and the Powell's workers, too, people came out in droves to support all our negotiations. Powell's also just has a huge wealth of staff that's knowledgeable and talented at getting the right book into the hands of the people who are looking for 'em.

Do you guys on staff talk about what's going on with the book business, do you worry you might be out of a job in the near future?
It is something we talk about all the time. I don't know if we see people buying less books, but I think people might be becoming more savvy about what they buy. The vast majority of books that have ever been written are out of print and are only available in a hard copy form. So for the forseeable future, I think we're going to be in a good place. There's still going to be a need for a bookstore.

"The Tramp" performed by Michael Ford on the new ILWU 5 "Little Red Album."