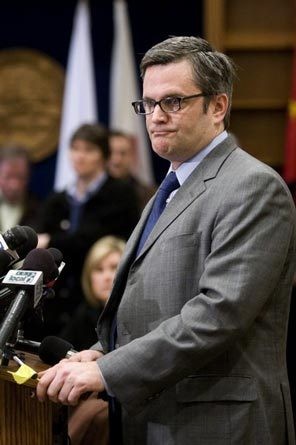 Mayor Sam Adams' spoke with me this afternoon about his new plans to combat gun violence in the city, released last week after a surge in gang violence throughout North and Northeast Portland left police practically begging for witnesses.
Sponsored

There are five proposals—and Adams is giving the public two weeks to comment on them before he makes them final and presents them to the City Council.

Among them: A curfew for kids and teenagers, stiffer penalties for carrying a gun if it's loaded, a law requiring any lost or stolen gun be reported, and an "exclusion zone" that would ban anyone convicted of a gun from areas that police say are gunshot "hot spots."

Adams called the rules "common-sense, modest tweaks" to current laws, the best the city can do in a political and legal landscape that makes it nearly impossible for local governments (or any government) to ban the handguns and assault weapons used to commit violent crimes.

That said, he's bracing for opposition from across the political spectrum—especially from the gun lobby, already offering the most, um, advice ...

"I wouldn't be surprised if we get hauled into court," says Adams. "If we do, I intend to defend our position vigorously."

But as desperate as most Portlanders are for some sort of tonic to the violence, Adams also knows some of his proposals will draw intense scrutiny from community groups and others concerned about civil rights.

His proposal to ban convicted gun criminals from hotspots where police log an unusual number of shootings—with exceptions for those who live and work in such areas—echoes the city's rejected efforts to create drug- and prostitution-free zones.

Opponents of those efforts are waiting cautiously for Adams' final recommendations, hoping neither the exclusion nor the curfew proposal become inadvertent tools for discrimination.

"We put the draft together seeking to carefully learn the lessons from the drug- and prostitution-free zones," says the mayor. "This one is intended to be narrowly tailored, and it's intended to be based on actual convictions as opposed to a ticket or an infraction or an arrest.

"I'm very concerned about personal liberty. And that's why it wasn't any old conviction on any old crime. It has to be a gun crime."

Asked whether he rushed his plans in place after last week's hot-weather violence, and after an activist criticized him Friday at a Gang Violence Task Force meeting, Adams says the ideas had been cooking ever since he took over the police bureau and were due any day no matter the external circumstances.

"It was a sad coincidence," says Adams, "a sad but poignant coincidence."