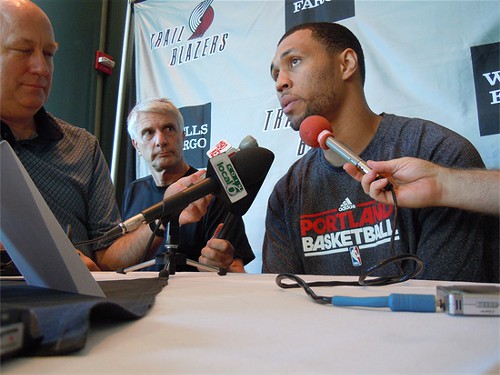 Blazers media day is the NBA equivalent of the first day of school—How was your summer? Bitchin'.—with the regular lot of players addressing their off-seasons, plans for the upcoming seasons, and future goals for the franchise. The big question this year was how involved Rudy Fernandez would be in not only the media day event, but the forthcoming training camp and season as well. Rumors swirled that Fernandez wouldn't even bother with this dog and pony show, and I was hoping he'd either send a body double, fashion a scarecrow of sorts with a sack of flour stuffed in a jersey (defensively this would be a vast improvement), or just yell at the media en Español. He did none of these things.

Instead Rudy gave the briefest of all talks with the press, quickly stating that he has enjoyed his time in the NBA but he prefers the "European style" (Vigorous bounce passes and uncontrollable flopping?) and wants out of basketball in the States. He explained how he misses his family and wants to return to Spain, which can't do wonders for his trade value. He will report to camp though, which takes place at the Blazers' facilities in Tualatin ("The Spain of the Pacific Northwest"). 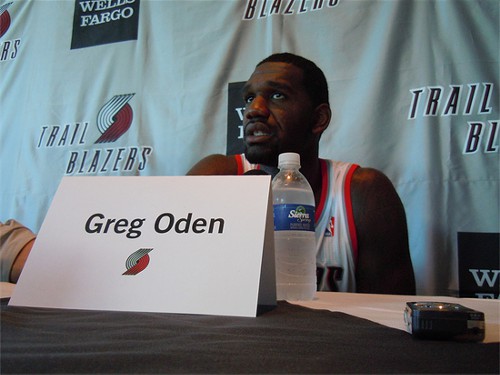 Since you asked, Greg Oden was shocked to learn he was chosen to represent the team in the NBA Jam video game reboot. He seemed to dismiss the fact that Clyde Drexler was also on the team with him (Blasphemy!), and admitted to his loyalties to the Indian Pacers in the original version of the game. In other gigantic injured center news, Joel Przybilla seemed upbeat and open—his usual moods range from angry to mumbly, and oftentimes angry and mumbly—as he happily chatted about his newfound interest in bicycle training, going as far as to plug the Bike Gallery in Lake Oswego for customizing his extra large ride (with streamers, a basket and pegs, I assume). As far as serious news goes, Oden seemed hesitant of when he could return to the court, and Przybilla just seemed content with being upright and active again. 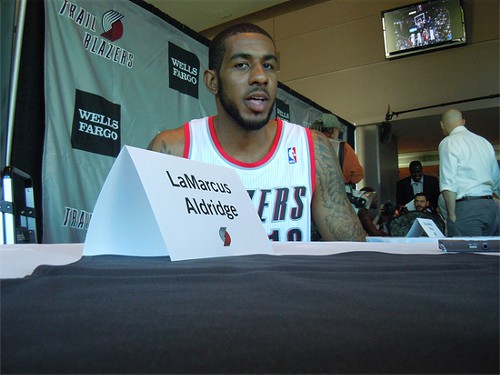 LaMarcus Aldridge looked noticeably bigger, explaining to a table full of media members eating club sandwiches how he was dedicated to working "his core" during the Summer break. Andre Miller talked about his infamously relaxed offseason work regiment, commenting how despite his streak as the resident iron man of the NBA, no one on the team ever solicits his opinion on conditioning and injury prevention.