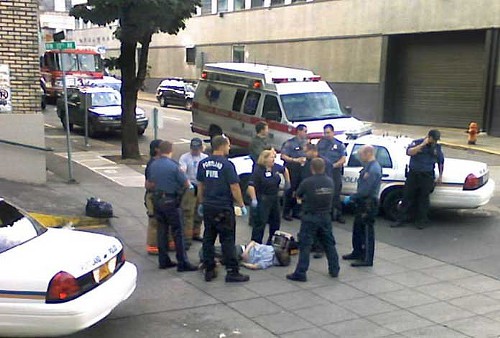 The Portland Police Bureau finally released the last batch of internal documents probing the 2006 beating death of James Chasse Jr.—an outpouring that includes more than 2,000 of pages of transcripts and reports by internal affairs detectives, and training materials and findings by the city's police oversight boards.

The documents—thousands of pages in all—echo other reports and court documents released in the years since Chasse's death September 17, 2006, at the hands of police officers. This release, along with a batch in August, was unsealed after the city settled with the Chasse family for $1.6 million.

The most scathing finding came in a training division review that found both the pursuit that led to Chasse being tackled—and then the tackle itself, which led to the injuries that caused Chasse's blunt-force trauma death—were not within policy. (The Use of Force Review Board, with the exception of one member, discounted that assessment and sided with a supervisor who argued otherwise.)

The officer who did the tackling, Chris Humphreys, had said he thought Chasse was urinating, but later admitted he had never seen Chasse urinating. He also thought Chasse was under the influence of a controlled substance—but later admitted he never considered that Chasse was acting strangely solely because he was mentally ill. Chasse, who was 42 when he died, struggled with schizophrenia for much of his life. In the days before his death on a street corner in the Pearl, his family had expressed concern to authorities about his mental state.

The internal affairs documents provide yet another opportunity to see the officers and paramedics involved in Chasse's death describe what happened in their own words. The transcript of one hourslong interview of Humphreys lasts for 88 pages. Keep reading to see some excerpts.

Detectives asked about the legal justification for the stop and they questioned whether the officers in their initial interviews had been honest in describing what happened (no perjury findings were sustained).

They also explored the shoddy communication and questionable decisions that kept paramedics from properly checking Chasse for injuries before he was taken to jail (Humphreys signed the form waving off an ambulance trip for Chasse), where he was left to sit in jail for several minutes until nurses there refused to admit him.

Humphreys then attempted to drive Chasse to the hospital, but Chasse slumped over in the back of his squad car and was soon pronounced dead. The medical examiner, previously and in newly released interviews with internal affairs detectives, said Chasse's odds of survival would have improved immensely if he'd received prompt medical coverage.

Discipline, in the form of suspensions, was meted out over the way Chasse's medical issues were handled. But no discipline was ever handed out for the pursuit and the takedown that caused those issues.