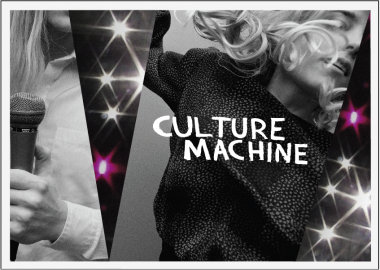 In this week's issue of The Mercury, I wrote a preview of Tahni Holt's new contemporary dance experiment Culture Machine that opened last night at Disjecta and runs the rest of the weekend. I commented in the preview that while I thought my interview with Holt fleshed out some interesting concepts about the piece (namely her theories of how cultures construct meaning), the show, on the whole, would probably gain much from having its technical elements in place.

I don't get to say this very often, so it gives me great pleasure to report that I was right. Last night's performance of Tahni Holt's Culture Machine (a collaborative effort with the rest of her team of culture mechanics: Suzanne Chi, Kaj-anne Pepper, Robert Tyree, Sally Garrido-Spencer, Thomas Thorson, and Dicky Dahl), was polished, invigorating, and at times, sneakingly disturbing. The mix it blended between technical spectacle and stunted, jagged choreography, along with an overall design that seemed to both embrace and poke fun at post-modern aesthetics, made for a piece that seemed self-reflective (literally, there was a whole wall of mirrors reflecting the images of dancers and audience members alike) and also universal. There were moments where it appeared that the machine was steering itself into somewhat pretentious seas, but these moments were so often illuminated in a tonuge-and-cheek manner, I can't help but think that the pretentiousness is forced. As if Holt wants you to notice it, and possibly laugh or point a finger at it.
Anyway, I could go on about this piece more, but writing about dance, can often change the experience of dance. I think I'll just leave you with a recommendation to trek up to Kenton, and check this one out.