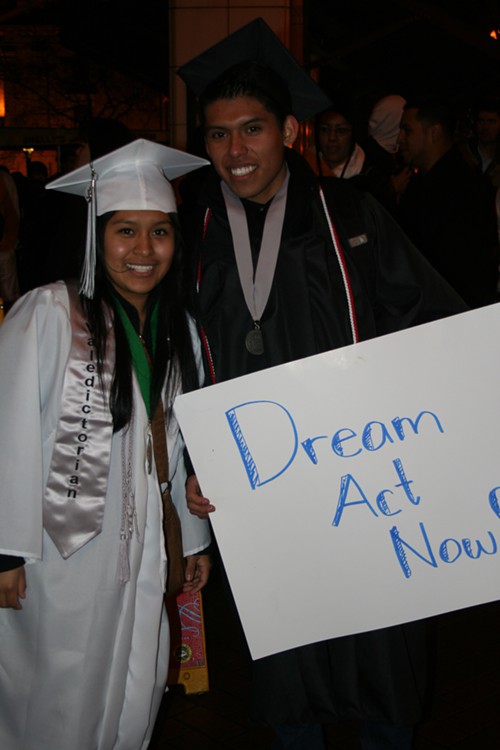 Last night just after sunset, 100 or so people, many of them decked out in graduation robes and mortar boards, gathered in the one corner of Pioneer Square not overtaken with Christmas decorations. The group was giddy and mostly very young, 20-year-olds and recent high school graduates who came to Pioneer Square to stage a fake graduation to raise awareness about the DREAM Act, a national bill which would provide a path to citizenship for children of illegal immigrants who graduate from American high schools.

For some in the crowd, appearing at a public protest meant putting their lives on the line: They're children of illegal immigrants, trying to attend college and live in the United States without papers. If they're arrested for any crime—like say the protest got too rowdy and cops got involved—they could swiftly be deported.

Elisa was wearing her blue graduation robe, her neck draped with several colorful cords she wore at her graduation from an East Portland high school last spring. "This one was for Honor Society, this one was for French honor society," explained Elisa, whose parents brought her to Portland from Mexico when she was four (Elisa, by the way, is not her real name). This protest, organized by student group Oregon DREAMers, marked the first time she'd publicly discussed her immigration status. "In high school, it was very taboo. We get information from each other, how to keep studying how to get by," says Elisa. "Something needs to change. Obviously the DREAM Act isn't going to fix our immigration system, but it's a very good step."

Part of the motivation for the protest is the case of Hector Lopez, an illegal resident who grew up in Portland, was student body president of Rex Putnam High School, and was attending Clackamas Community College when immigration authorities tracked him down and deported him to Mexico. Though he remains in Mexico, friends and his local family are fighting to bring him back.

As protest organizer Erika Molina tried to rally the crowd with a bullhorn, Clark College students and illegal residents Gabriella and Liliana laughed with each other to the side of the group. Liliana, wearing a royal purple robe and hat, said she wasn't nervous to come out the protest, just excited. "We'll be directly affected by the DREAM Act, we feel it's up to us to make it happen," she said. Without legal papers, she and Gabriella can't get federal financial aid for school. Liliana explained that she's attending Clark College because her fourth grade teacher offered to cover the cost. "He believed in me," she said, as the protest formed two lines and marched around Pioneer Square with shouts and woops of support for the DREAM Act.

Just as the protest wrapped up, the students received some good news: The DREAM Act had passed the House. Now Elisa, Liliana, Gabriella and thousands of other students are waiting for the Senate to decide their future.