Mayor on Leo Besner: "Policy Questions," But Promotion Will Proceed

After meeting yesterday with Jesse Cornett and promising to talk to Police Chief Mike Reese about today's expected promotion of Leo Besner, the officer who killed Raymond Gwerder, Mayor Sam Adams issued a statement this morning on the matter. 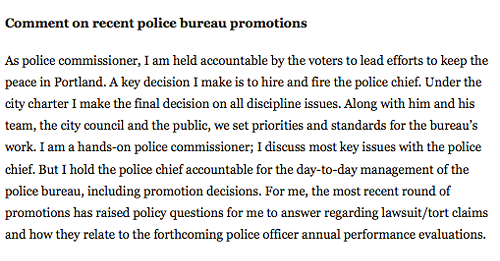 Adams' office confirmed this morning that the mayor, despite his concerns about Besner's record of tort claims and legal settlements costing nearly $1 million, he wasn't going to bigfoot Reese's decision to make Besner a sergeant. Instead, Adams will work with Reese to devise a policy that incorporates those issues—possibly through annual performance reviews that Adams is pushing for officers—into the promotions process. Reese has defended Besner's promotion, telling the Oregonian he had a "good" record and noting his performance on required examinations used to rank officers for advancement.

Cornett last night told me that he and Adams had a "good conversation," and that the gesture "makes an impact on me," even though Adams at no point gave him a hint one way or the other about how he was feeling.

"We highlighted these cases over and over and over—all of the lawsuits the city has settled and lost," says Cornett, a former city council candidate, "and the mayor was really thoughtful, asking questions. He was very, very patient."