Chocolate Birth Control. (And Other Inspiration from Planned Parenthood)

Okay, so Planned Parenthood didn't hand out real chocolate birth control at their 1,000-person annual luncheon today at the convention center, but they did hand out gift bags featuring condoms and chocolate in the shape of the Pill. Love it. 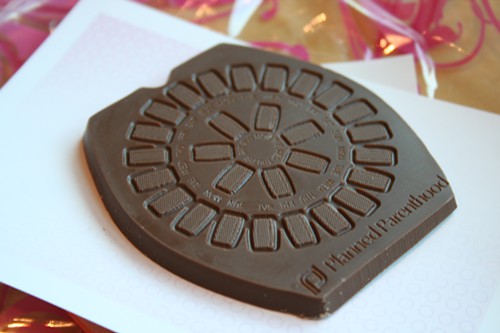 But what was really interesting was headliner Loretta Ross, an abortion rights organizer from Georgia, who related her own experience with protesters who erected giant billboards in Atlanta accusing Planned Parenthood of genocide for supposedly trying to abort all black babies. There's been the same sort of protests in Portland, though to a lesser degree, with picketers accusing the new NE MLK Planned Parenthood of racism. Ross is a hilarious speaker. Choice quotes:

"It's crazy, on it's face. But what it's really doing is guilting a whole lot of white people into thinking if they support abortion rights, they're racist. They used a racial edge to split the movement."

"Whatever protesters you have here, understand that they are just pimples on the ass of time. Down South, they're our governor."

"It is our human right to have sex. THANK YOU."