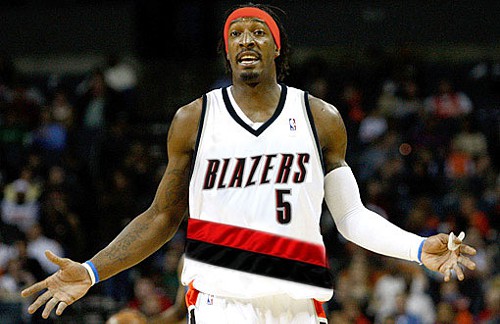 The NBA trade window slams shut at noon and there is nothing to report. Not a damn thing. No deals for Gerald Wallace (despite our above Photoshop work), Johnny Flynn, TJ Ford, or a deal to acquire James Harden's robust beard.

Hold tight, sometimes the deals trickle in after the deadline, so we'll let you know. Otherwise, get ready for a few more months of the same Blazers lineup.

UPDATE:
Finally a team from the Northwest Division got better. Sadly, it's not the Blazers. The Oklahoma City Thunder swapped Jeff Green and Nenad Krstic to Boston for Kendrick Perkins and Nate Robinson. A few more trades are rolling in (Goran Dragic!), but none involve Portland. I feel desperate to trade anything right now. Anyone want my vast collection of pogs?

12:16 UPDATE:
"Portland will send Joel Przybilla and a 2nd round draft pick to Charlotte for Gerald Wallace, source says." That it? Wow, that deal is a downright steal. Rich Cho deserves a ticker tape parade for that deal.

12:30 UPDATE:
That was too goo to be true. It's now Pryzbilla and a pair of future first-rounders for Wallace. Still, a worthwhile deal.

12:32 UPDATE:
Dang, looks like Dante Cunningham was part of that deal as well.

12:37 UPDATE:
Unless anything changes, this is the deal: Bobcats get Dante Cunningham, Joel Przybilla and two future first round picks. The Blazers get Gerald Wallace. No word what picks those are, since Portland has an extra first rounder from the Jerryd Bayless deal.