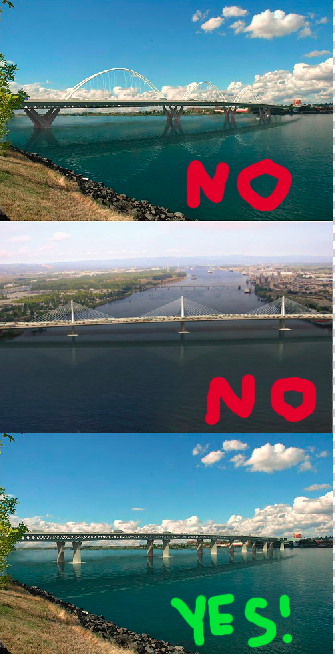 The choice is official! From the scenic location of a dock behind the Jantzen Beach Red Lion Hotel, Governor John Kitzhaber announced that the Columbia River Crossing (CRC) will go with the deck truss design, otherwise known as the "cheap but ugly" option for the bridge that will serve as a gateway to Oregon and Washington.

Flat and wide, the deck truss looks similar to Portland's most beloved bridge, the Marquam. It's the kind of bold, innovative structure that says: "Welcome to Portland! Here is a freeway for you!"

The two state highway departments support the deck truss design because it's cheapest, but the CRC design advisory group pushed them to reconsider and go with a cable-stayed design. The graceful cable-stayed option costs $60,000,000 more than the deck truss's $340,000,000 pricetag. Mayor Sam Adams also pushed the CRC leaders to go with the cable-stayed bridge, but said in a press release this morning that he will support the governor's decision.

The governor said in his statement that he must move the project along in the "most cost-effective way possible" and promised to stay on schedule. The big bridge plans to break ground in 2013.

Speaking of cost effectiveness, this design rehash was necessary because an independent review panel declared last year that the bridge the CRC team had spent $117 million planning was seriously flawed and should be canned.

Bridge critic and economist Joe Cortright says he's highly skeptical the bridge will actually break ground in 2013. "The critical piece of staying on schedule is getting funding and they're supposed to both legislatures vote for funding by this summer," says Cortright. "Washington's legislature recently voted the project $50-80 million for planning, but nothing for construction. So if they don't have money for construction in this biennium, it's unclear what they're going to start construction with."

UPDATE 6:52 PM: After the morning's press conference, activist group Stop the CRC launched a petition on their website. They're trying to get 1,000 signatures on a petition reading, "Tell our governors: Not one more dollar for the Columbia River Crossing!"