From Pawnee With Love

I recently gave Parks and Rec a second chance (I had watched the first few episodes and was none too impressed), and I'm pleased I did. On last week's episode, Ron Swanson had a grill-off with Rob Lowe's more health-conscious character. Lowe asks Swanson if he's ever had a turkey burger. Swanson replies: "Is that a fried turkey leg inside a grilled hamburger? If so, yes...Delicious."

And who's going to argue? Not Eater's Paula Forbes, who decided to put the concept to the test. Behold, the 5 lb. Ron Swanson Turkey Burger. 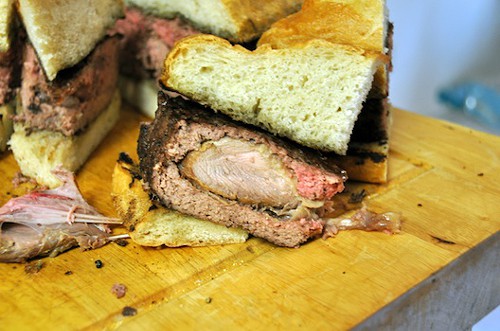 The recipe is after the jump, but click over to Eater to see step-by-step photos of its creation.

In other news from Pawnee's gourmands, Aziz Ansari recently gave a shout out to our own Bunk Sandwiches in an interview with Bon Appetit. When asked what was missing from the LA Food Truck scene, he opined, "Bunk Sandwiches in Portland would be ridic." Hands off, LA. (Thanks to our favorite anti-Suri Cruise blogger, Marissa Sullivan, for the heads up).

1. Heat the oil in a pot to about 350 degrees F (we guessed). Preheat the oven to 325.
2. Rinse the turkey leg and pat dry, as you don't want any explosions when you put it in the hot oil. Fry until the skin is crispy; it took us about ten minutes.
3. Mix about two teaspoons salt into the ground beef.
4. Butter an oven-safe, burger-shaped cooking vessel generously. We used a 5-quart pot.
5. Press one third of the ground beef into the bottom of the pot. Press the fried turkey leg into the beef and surround and cover it with the rest of the beef. The goal is to make it appear as though there's not actually a turkey leg in there. Depending on how lean your cut of beef is, you might want to dot the top of the burger with a little more butter so it doesn't dry out while it's baking.
6. Bake to just below the temperature you want your burger to be, as it'll cook a little more on the grill. We were aiming for just shy of medium so we baked it to an internal temperature of 130 degrees. It took about an hour and a half. (We also cooked it at the lowish temperature of 325 because we didn't want the outside of the burger to brown until it got onto the grill.)
7. Get your grill fairly hot. The goal is just to get some grill marks and some smoky flavor on there. We drained the fat and juices out of the pan and brushed them over the burger while it was on the grill, again to keep it from drying out.
8. After the burger's done grilling, let it rest in a pan. Meanwhile, slice the loaf of bread as one might slice a hamburger bun, butter generously, and toss it on the grill, butter-side down, to get it crispy.
9. Assemble your burger. We sliced it like a pizza for serving and it worked pretty well. Make sure to warn your guests about the turkey bone.
10. Add ketchup if you want.