This morning, Commissioner Nick Fish and a bunch of other politicians, developers, and nonprofit leaders ceremoniously donned hard hats and broke ground on the first affordable housing project in South Waterfront.

When the city and Portland Development Commission inked the deal to turn an industrial neighborhood into South Waterfront's urban renewal area back in 2003, a major part of the agreement was to make South Waterfront a "diverse, inclusive" neighborhood that included 780 units of affordable housing. Today, after having built a tram and streetcar and over 1,000 luxury homes, South Waterfront is an enclave for the rich with exactly zero units of affordable housing. I detailed exactly what went wrong last year, but this morning, only five and half years behind schedule, the city was finally able to celebrate an affordable housing groundbreaking in SoWa. The Block 49 project will have 209 affordable units, including 42 reserved for low-income veterans (side note: Does anyone else think it seems crazy that an average market-rate studio in Portland apparently costs $626?). You can read more about Block 49 here.

The real cost of delayed or nonexistant affordable housing is human. Here's a photo of a guy who wants to live in Block 49, his name is John Bancroft: 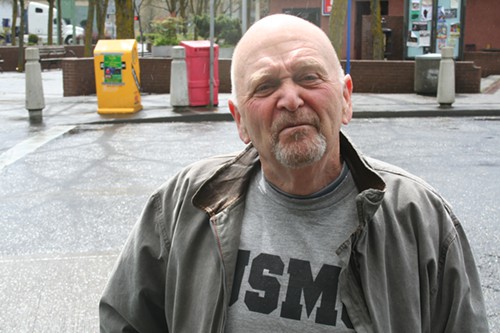 Bancroft, 65, was one of the first people to put his name into the hat to try and score an apartment in Block 49. He and his wife are currently squeezing their son’s 800 square-foot St. Johns house while he receives expensive treatment at OHSU for cancer caused by his heavy exposure to Agent Orange during two tours in Vietnam.

Bancroft would love to move to South Waterfont, close to downtown, the hospital, and the river, but can’t afford to pay more than $600 a month in rent. If affordable housing had been built at the rate it was supposed to based on the city and PDC's promises in 2003, he could potentially have a place of his own already.

But he’s willing to hold out for 15 months for the chance to move into one of the Block 49’s affordable units.
“I think a lot of us are in the same boat,” says Bancroft. “You get what you can get and you’re grateful for it.”