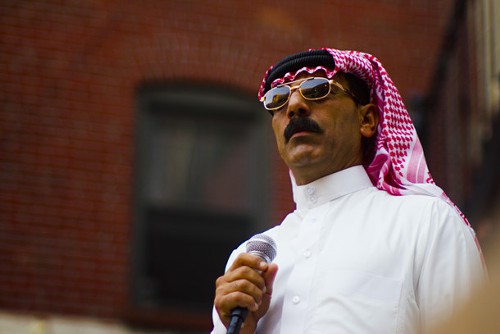 Another week, another Mercury music section to read instead of watching Bob Dylan's appearance on Pawn Stars. To be fair, it's way better than that time Phil Ochs' ghost made a cameo on Storage Wars. That was scary.

Way before cassettes became ironically cool again, Omar Souleyman's tapes were appearing in the markets of his homeland of Syria, and throughout the Middle East. How many Souleyman cassettes are there? Oh, about 500 different albums and compilations. These days Souleyman has become one of the more fascinating characters in global music, plus he is the only musician that can pull off the "police officer look" of push-broom mustache and aviator shades.
LISTEN:

After teasing us for years with a solid EP and plenty of raucous live shows, Sallie Ford and the Sound Outside live up to their potential with Dirty Radio. I still think she sounds like Olive Oyl.
LISTEN:

Sallie Ford and the Sound Outside - "Danger"

Close only counts in horseshoes and hand grenades, not albums about divorce. While Manchester Orchestra's Simple Math isn't dedicated to a failed marriage, it sure comes close.
LISTEN:

End Hits: I don't want anybody else/When I think about you I touch myself