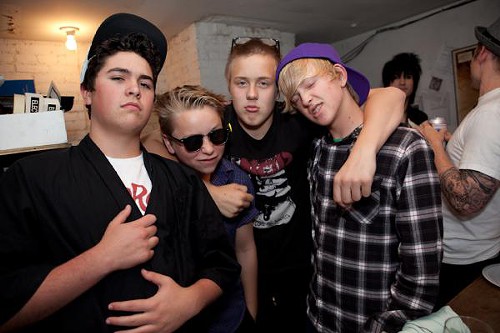 It seemed odd when the publicist for Red Hot Chili Peppers and Metallica emailed me last night to let me know that a teenage punk band I have never heard of (Emily's Army) was playing a show at Alberta Street Pub and a North Portland house. Hmmm, suspicious.

To the Google!
Oh yeah, that's why.

Turns out that the drummer for Emily’s Army, Joey Armstrong, is the son of Green Day's Billie Joe Armstrong. Not coincidentally, the elder Armstrong produced Emily's Army's debut, Don't Be A Dick, and will be releasing the album on his Adeline Records imprint. But before you cry punk rock nepotism, Emily's Army sound pretty good. Well, at they sound like Gilman Street 1994—which, ironically, might be exact time and location of where they were conceived.

LISTEN:
Broadcast This by Adeline Records

Must be an awkward dinner with rockstar dad after he finds out your band sings the line "I don't want to listen to the radio, boring music," then again, Broadway pays the bills at the Armstrong house these days.

Emily's Army will be at the Alberta Street Pub on June 20. The house show is the following night. We won't publish the address, but I'm sure you can find it.