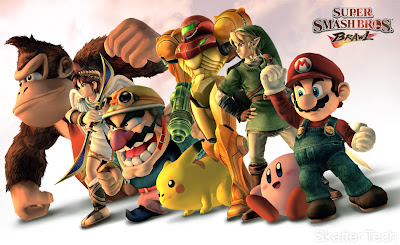 Get ready, gamers. Best Bout Gaming, located in SE Portland, is hosting a monthly Super Smash Bros. Brawl tournament- the first of which ensued this weekend and culminated in a bloody, though heroic, poking fight between bl00diRav3nXX and b0dy0dor420 over what I assumed used to be a Gamecube controller.

Joking. But in all honesty, the entire Best Bout building was saturated with the smell of competition. Or maybe that was BO. Regionally ranked gamers duked it out to be the top dog at Super Smash Bros. Brawl (and win the $70 grand prize), employing carefully-honed techniques inspired by Smash forums, Youtube videos, and numerous hours of training with fifth grade brothers.

A live video of the competition streamed on Best Bout's website, so we know this is legit.

Some incredible insults were hurled, many manipulative tactics were utilized (one Brawler told me deceitfully that he had never played before this tournament to psych me out—I still beat him), and a lot of fun was had. If you're a casual player and want to learn a few tricks, I highly recommend you stop by next month and spar with some of the pros. Even more, let's get some new lady-gamers in there and show them who really smashes bros (Zelda, Peach, and Samus, amirite?).