My Own Private River Premiere

Today was the sold-out premiere of My Own Private River, James Franco's edition of Gus Van Sant's 1991 My Own Private Idaho. Confused? Let me break it down. Van Sant's film came out when Franco was a ripe young teenager filled with angst and desire to belong ("I was always looking for people who could understand me," in Franco's words), instantly making it one of his favorite films. Years later, after becoming all fancy pants famous and being chosen to be in Van Sant's Milk, Franco confessed his love for Idaho and asked Van Sant if he could make a more artsy film from the movie's discarded outtakes, focusing heavily on the film's star, the late River Phoenix. With Van Sant's nod of approval, Franco crafted My Own Private River.

Let me set the scene: The Hollywood Theater is packed with a combination of giddy gals prepared to sweep Franco off his feet and tweed-adorned film admirers (read: snooty old men) chatting about their mutual pal "Gus". Franco and Van Sant sleepily amble on stage. Franco has some unidentified white stain on his jeans and has a hard time getting his ideas into words. "It's just, like, me trying to play Gus," he said of his work. "Yeah." Regardless, any slight smirk or dazed joke led to the audience's murmur of approval. At the end of the day, James Franco is a babe.

Van Sant — better worded than Franco — called Franco's idea "kind of scary" at first, but ultimately was impressed by the project. "This is really James' show," he said. "It's impressive what he's done with the original, I had no idea what it would turn out to be." 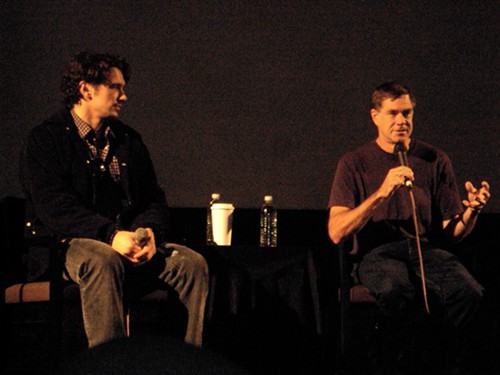 Alright. So I'm no film critic/connoisseur, but I'll lay it out for you as best I can. For an artsy unconventional movie My Own Private River kept me involved and interested for the hour and a half long duration. Franco harked back to Van Sant's earlier work with his long uncut shots — like 2003's Elephant — that somehow kept my eyes glued to the screen, despite my subconscious shouting "cut already!". It made the film both peaceful and introspective in a way, giving the viewer a lot of time to soak in each scene. The film loosely follows the timeline of the original movie, jumping from Portland to Idaho to Italy, but zooming in on the atmospheric and emotional aspects the rather than the plot. Kind of like the soul of the original film. Deep, right? A lot of beautiful landscape shots and face close-ups. Franco wove humor in between despair and scumminess — oh, to be young and hustlin' — adding necessary balance to the film. Who knew taking the outtakes and scene rejects from an already well done piece of work could create such a captivating feature-length follow. Made me consider the rejected gold from other classic movies.

Here's a snippet of the film: