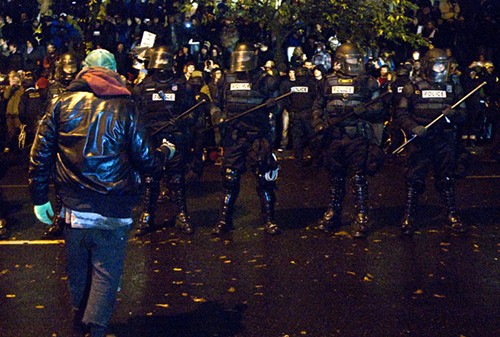 So. Eviction notice served, but the Occupation remains in downtown Portland.

Thousands of protesters went toe-to-toe with riot gear-clad police in the middle of the night and peace, for the most part, prevailed. I feel like giving the whole city a high five.

Curfew Broken: Mayor Sam Adams and Police Chief Mike Reese set a deadline of Saturday at midnight to empty out both Lownsdale Square and Chapman Park. But midnight found a crowd of 5,000 people dancing, biking, talking, and drum circling in the parks and Main Street. Instead of moving in to forcibly evict people, the police waited by.

Dance Party: For about two hours, the mood on the scene was on of New Year's Eve free-for-all party. Someone was giving out caviar. It was a gay ol' time. Occupy Portland's media group made this little video that captures the mood:

Street Closure Attempt: At about 1:45am, police began trying to clear the Main Street, first by announcing over a PA system that remaining in the street would leave protesters subject to arrest or use of chemical agents. The crowd chanted back, "Too big to jail!" and a group of police in riot gear and five mounted patrol officers began to move into the crowd. Police deployed pepper spray on at least one person.


Police Officer Injured: As the police moved into the crowd, 23-year-old Cameron Matta (still-bleeding mugshot here) is accused of throwing a firework at an officer, causing him to fall over and be injured. In the tensest moment of the night, the police pulled back, out of the crowd, calling an ambulance for their fallen member. As the crowd cheered their retreat, the scene was heated and many shouted slogans of nonviolence. The police officer, luckily, was okay.

Rough Arrest: Not wanting a crackdown on the entire group, the crowd then appears to have pushed Matta forward to police. He was arrested on SW 3rd Avenue, sustaining minor injuries.

Hours Long Street Standoff: Between about 2:30am and 6am, the protesters and police stood their ground. Protesters built barricades on SW Main with furniture that was lying around, small pockets of the crowd got rowdy and near-violent but never took action, and there was a surprising amount of open pot smoking. The crowd thinned to a couple hundred.

At 6am, the police moved through the streets, asking the protesters to return to the parks. With no violence, the streets were cleared. The mood in the parks was victorious. "We held the parks!"

This was a tense night that easily could have led to violence, mass arrests, and a worsening of the relationship between Portland's citizens and its police. Instead, we had one arrest, one police injury, and the parks are cleaned out of the mess accumulated during the weeks of occupation. Sunday at dawn, it feels like the protest has a clean slate.

The city still plans on clearing out the protest, but Mayor Sam Adams, who watched the protest through the night along with Chief Mike Reese, dismisses a feeling of victory of disappointment. "I'm here to enforce laws and keep peace. I'm not here to tally scores. This isn't a game," he told our News Editor Denis Theriault. There's no clear timeline, but the Mayor says the city still plans on clearing out the parks and erecting fences to keep protesters out at some point in the near future.

Big (HUGE!) shout out and thanks to our reporters on the scene overnight: Denis Theriault, Matt Bors, and Georgia Perry. You guys are rock stars! Someone get them some donuts, ASAP.