PHOTOS: Occupy Protest Gets Inside Wells Fargo, Raises Upside Down American Flag Outside

In preparation for the anti-big bank march through downtown Portland, one bank shut itself down: Chase Bank on Pioneer Square posted a sign in their front door reading, "Due to Occupy Portland, this building will be on lockdown until further notice."

But protesters shut down a second—Wells Fargo on SW 5th. As the crowd of an estimated 500 people swarmed up to the building, protesters had already gotten inside and held up a giant banner reading, "Stop funding prisons!" The protest focused on Wells Fargo providing financial backing to US immigration detention centers. As protesters banged on the building's large glass windows, employees of Wells Fargo watched the action through the glass from behind a line of riot police. Most looked rather worried, but a couple flashed peace signs at the crowd as the protesters chanted and sang. Police arrested the people holding the banner inside the building—I'd estimate that to be four arrests.

While most of the crowd shouted at the bank employees to come join them on the outside, some were definitely glad to have a chance to vent their anger (almost) face to face. "How much does your fucking sweater cost?!" one woman shouted, through the window, while others called out, "Solidarity with the working class! Come join us!"

The protesters also took down the Standard Insurance Building's American flag, running it up the pole upside down as a traditional symbol of distress, sparking a massive cheer from the crowd.

The march is still sweeping through downtown, I ducked out to upload some photos. The livestream of the protest is running, too. 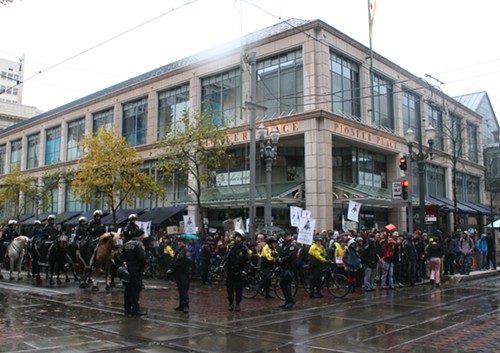 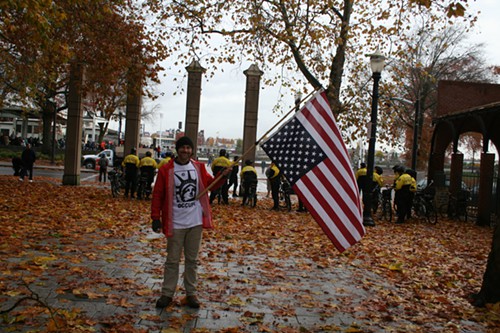