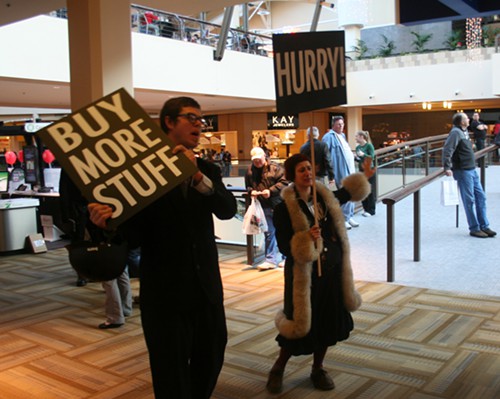 I've been tolerating the endless talk of Black Friday and holiday shopping, but Cyber Monday is too much. First of all, why did someone name their shopping day after people having sex on the internet? And secondly, why is everyone insisting that a day in which we're encouraged to spend money online as a "holiday"? A day when we're paid, but don't have to work, is called a holiday. A day where we funnel our money to online big box stores and told to feel good about ourselves is called a scam.

The way mainstream media has been framing their stories about holiday shopping is as if shoppers are heroes pumping much-needed money into the economy. America is in shambles! People buying flatscreen TVs on sale are our only hope! The loaded language is all over: In the New York Times', a discount handbag site is an "underdog"; on NPR, Black Friday shoppers are "warriors"; in the San Jose Mercury News, strong sales are "Black Friday cheer"; on MarketWatch, Black Friday spending "gives the season hope".

Thousands of Americans spending millions of dollars on discount electronics and handbags isn't called hope. It's called massive debt. Putting a positive spin on the gluttony of holiday spending is like calling six courses of cake a reasonable meal.

According to TIME magazine, 13.6 million Americans hadn't paid off 2009's holiday spending spree by the time 2010's holidays rolled around. Only 13 percent of people say they've been saving money all year to pay for holiday gifts, so it's no surprise that of the people who are actually responsible enough to make a budget for holiday shopping, 39 percent overspent their planned budget. This is what's wrong with our economy in the first place—people, companies, and institutions overspending, then winding up crushed under debt. What if we discussed holiday sale shopping not as an act of heroism but a sad, desperate act of addiction?

The 50-Foot-Tall Murderous Aliens That Invaded Earth Last Year Are Starting to Retreat. Can We Please Get Back to Normal Now?