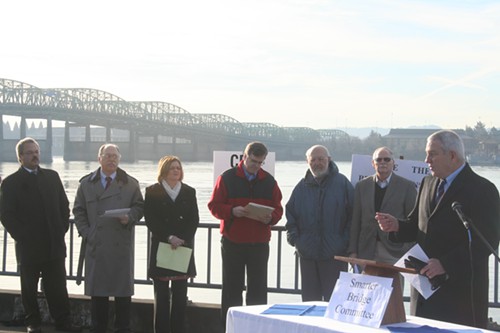 Influential individuals across the political spectrum met this morning on the sunny, frigid banks of the Columbia near the Vancouver base of the hulking I-5 bridge to discuss the one thing they can all agree on: The Columbia River Crossing (CRC) plan to replace the bridge is flawed and should not be funded.

"Please stop the bleeding," said Councilor Hosticka. "At a time when the state highway department is laying people off, it's a bad idea to keep spending over a million dollars a month on a project that may never get built. After six years of trying, there is not yet any assured funding from any source."

"The current finance plan is a disaster waiting to happen for the taxpayers of Oregon," said Plaid Pantry President Chris Girard.

Feds have given the green light to bridge funding, but the money is not yet in the bag. Locally, Vancouver residents rejected a tax that was supposed to pay for light rail and this week, Washington governor Christine Gregoire said the CRC is her top priority—but didn't propose a way to pay for it.

The project critics disagree on potential fixes for the I-5 corridor—a representative for "Third Bridge Now" wants a new freeway bypass for freight, Jim Howell of AORTA wants upgrades to the nearby railroad bridge that could make it fit for high speed rail—but the mutual desire to take a step back and examine alternatives was clear. "Let's not spend money we don't have on a project that will tie our hands for a generation," said Metro candidate Bob Stacey. State Rep Mitch Greenlick was more blunt: "This is a bridge project to nowhere, a steamroller headed off a cliff."