Newsflash, racists! Undocumented immigrants who earn paychecks in the state pay taxes on what they earn—a lot of taxes.

A new study (pdf) out from the Oregon Center for Public Policy (OCPP) this morning crunches the demographic data on undocumented workers in the state and determines the group pays between $154 to 309 million into public coffers every year.

While it's pretty impossible to get an accurate count of undocumented workers and how much money they make, according to the Pew Center, Oregon actually has the ninth highest undocumented immigrant population per capita in the country (right behind New Mexico). Here's OCPP's analysis of their tax rates: 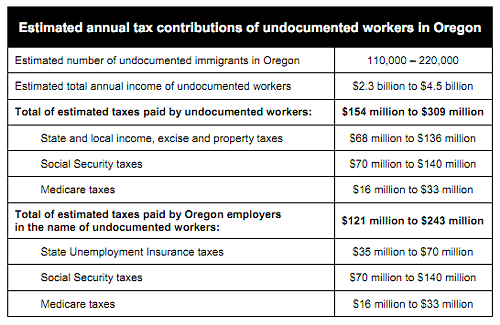 "Immigration laws need to be based on the facts," says OCPP's Juan Carlos Ordonez. "Generally speaking, there is the assumption that undocumented workers don't pay taxes and mooch off the system, which is not true at all, because they pay taxes but then aren't able to access many of the social services everyone else can." There are no specific laws pending in Oregon that would impact undocumented workers, but other states have ramped up efforts to make life tough for immigrant workers: In 2011, Alabama passed a harsh immigration law aimed at workers, which then led to farms flailing for labor.
If you enjoy articles like this, please help the Mercury continue our mission of providing up-to-the-minute information, progressive journalism, and fun things to do in Portland by making a small recurring monthly contribution. Never forget: Your help is essential and very much appreciated!
CONTRIBUTE NOW