Hello and welcome to my new bloggy... columny thing about webcomics! Every couple of weeks I'll fill you in on a webcomic worth reading. What is a webcomic? No one knows! The goal isn’t really to be super critical, since the majority of the products on display here will be free and easily accessible. But they can be voluminous and a little daunting to approach, and that’s where I come in. I'll paw through the archives, flop sweat the tough questions at creator panels, and generally get you started down the path to semi-regular readership. Will you like all of them? Of course you will, because I like them and that should be enough for now.

Moving on! Let's get this started with some local talent. Sequential ingénue Emi Lenox has been posting her journal comic Emitown at emitown.blogspot.com since the tail end of 2008, and Image Comics has been publishing them in book form since the tail beginning of 2011. The Emitown Volume 2 book release is at 6 pm tonight at Bridge City Comics, which makes this a perfect time for an Emitown primer (with exclusive-ish page from the book, plus email interview with Emi)… after the jump!

As you can see, the art in Emitown is cute as a cartoon cat's soulless button eye. The action follows Emi's triumphs and tribulations in our own fair city, more or less. There's also the occasional pop culture detour (see above) and indie rock pinup girl. I asked Emi via email which comic she least liked doing, because that is the hard-hitting comics journalism you are going to see in this space. "Most of the pages post break-up," she emailed back. "It was embarrassing to draw even when it was just me seeing them. Very humbling post-breakup depression can be."

I also asked her what her favorite comic was to do, which I present without comment. 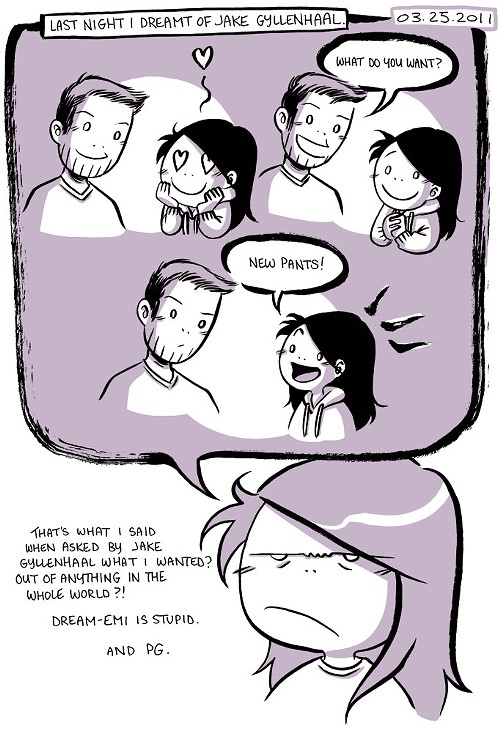 When people tell you about themselves, they tend to cut out the boring middle parts. It's either "Oh man, we went clubbing at that secret disco underneath City Hall" or "My dog has the shits again." Auto-bio comics tend to break that way too. You get the highs and the lows in a higher proportion than is representative, which works in fine in a conversational context because then you move on to talking about sushi or the moon or something.

The problem with some auto-bio comics is that the subject matter is JUST their day, and it's often JUST crazy antics or poopy dogs. In too high a concentration, these themes can come off as boastful, malcontenteed, or gossipy. If not all three. Easing the foot off the emotional gas pedal can go a long way to making the reader feel less manipulated.

What I enjoy about Emi's comic is that she keeps at least half the focus on the mundane in-between. And then she smashes it through some sort of magic cartoon vodka filter so that it's interesting to look at. Topics like low-level workplace anxiety, newspaper poaching, and the trouble with llamas vie for as much attention as messy breakups and manic pixie party binges. (Between you and me, most journal comics are over 90% manic pixie party binges and that is just too much.) 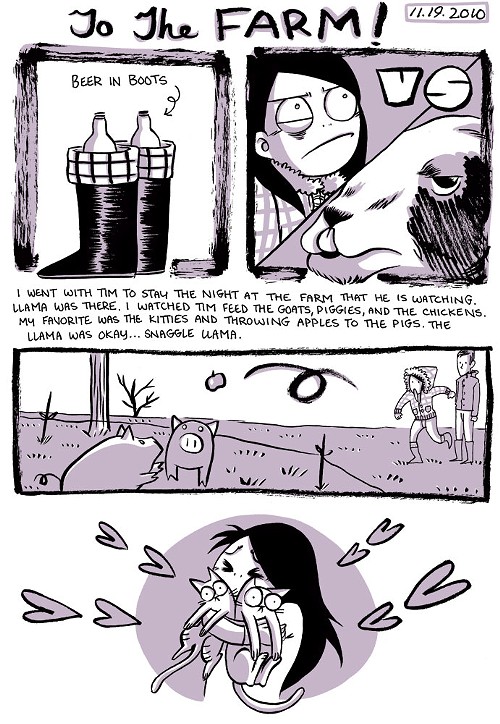 More importantly though, she is really good at drawing food (something I had not considered an important talent until exactly right now). And animals, but I already knew I liked those. I asked Emi "Animals or sandwices?" to which she replied "TO EAT? ANIMALS IN SANDWICHES. To love? Animals alive. But I like to eat them too. I think I'm not understanding the question." Upon reflection, that was a terrible interview question. But there’s no going back now. What's done is done. 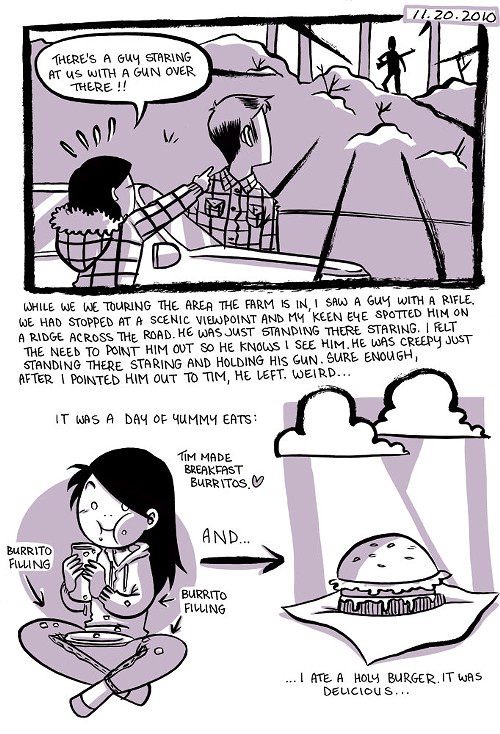 Emitown has been running for a few years now, and in that time it's gone through some stylistic shifts. Starting at the beginning might give you the wrong idea about what comes next, and won’t necessarily match up with the printed material either. That's where I come in! I say start at the beginning of 2010. There's the palette shift from blue to purple, but more importantly there's something of a contained story arc, or at least some common themes and related developments. After you finish that, you can work your way backwards, I guess. Or do whatever you want. I'm not the boss of you.