Timbers Experience A Rather Rapid Relapse 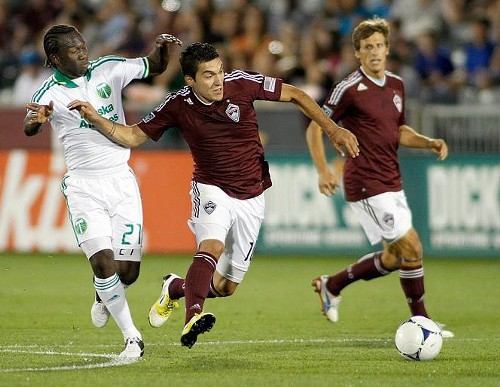 Just when fans thought they'd accepted the final nominee for "Worst Performance of Portland's Season," the Timbers came out flat and face-planted their way to 3-0 defeat at Colorado on Saturday night.

All that supposed momentum from the barnstorming win over Seattle? Yeah, gone. Any semblance of good feelings gave way to a lackluster effort from Portland, which yielded a pair of goals in the opening 23 minutes and allowed the Rapids to dominate possession, duels and the match. The PTFC defense that blossomed over the past six weeks into one of the best in the league? Nope, it wilted in the heat and humidity of Commerce City, and once again, questions about tactics and toughness alike are swirling around Goose Hollow.

“We had a great performance last week," said coach John Spencer. "I said to them, 'you’ve got go out, you’ve got to match it, everybody’s eyes are on us again, saying can you play away from home, can you do this, can you do that.'

"And we never put [those questions] to bed."

Instead, Portland proved that old habits die hard, and though more disappointing losses have come this year (see: Cal FC), none have felt more frustrating for fans. If chants were loud enough to travel 1,250 miles, I'd imagine some incarnation of "CARE LIKE WE DO!" would've rang across the Rockies on Saturday.

So can it get better? (Un)Fortunately, we won't have to wait long to find out.

Tuesday's meeting at home with red-hot San Jose can't come quickly enough, assuming the Timbers show up in the right frame of mind. Portland has certainly shown what it's capable of accomplishing, but as any fan can tell you, that spectrum swings wide. Still without a road win in 2012, Portland sits in eighth place out west and there are few easy answers on the horizon.

"We've just got to be stronger mentally," said keeper Troy Perkins, who was visibly annoyed as the defense struggled to prevent Colorado from finding space and getting service. "It's as simple as that."

If only. With five matches over the next 20 days (including three on the road), the Timbers' sophomore season is on the brink of swirling out of control ... and fast.

"Bottom line, (Saturday's performance) wasn't good enough," said Timbers Cap'n Jack Jewsbury. "We’re a better team than we are playing on the road. It can’t just be at home when the crowd is behind us, and it is easy in that sense. We’ve got to be able to create our own energy on the field whether it’s home or away.”

Speaking of creating energy, check out this slick video from The Daily on Timbers Army's doings during the Cascadia Cup battle with Seattle last week. It may help you forget what happened over the weekend—which might be just what fans and players alike need about now: