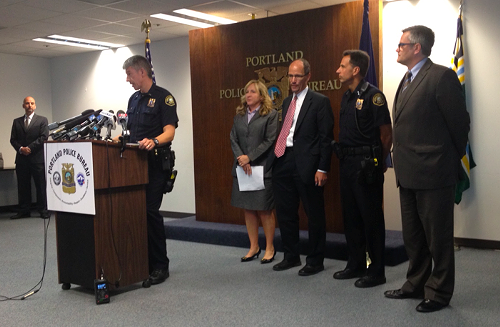 The US Department of Justice has declared that, indeed, the Portland Police Bureau has engaged in "a pattern or practice" of violating the constitutional rights of mentally ill Portlanders through the use of excessive force. And at a news conference this morning, both federal and city officials stood together and promised a raft of changes to the way Portland cops are trained and disciplined, and how they interact with members of the community.
Sponsored

While making sure to stress that most uses of force are legal and constitutional, the DOJ found "there is reasonable cause to believe that the Portland Police Bureau is engaged in a pattern or practice of using excessive force against people with mental illness or those perceived to have mental illness." Specifically, investigators found cops rely too heavily on Tasers—using them when they're not justified or cycling them for too long. Investigators also found that officers use force more often than justified when making low-level arrests.

The report blames deficient training and supervisory policies that, officials say, have been around for decades. It also blames a failing system of community mental health care in Oregon (and elsewhere in the nation) that leaves cops in the role of playing first responder for people in crisis. The report comes at the same time as the feds work to help the state improve its ability to care for the mentally ill.

The recommended reforms—including improved crisis training, an early-warning system for officers having problems with force, improved policies for interacting with the mentally ill, a community advisory panel—will be written up in a court-enforceable document in as soon as a month, federal officials say. Until then, the DOJ is planning another round of meetings with community groups and officers for feedback. Portland is unique nationally for having mental illness as the focus of its probe, and it's hoped what emerges here will be used as a national model.

"What we expect to do is a lot of listening," said Thomas Perez, assistant attorney general in charge of the Justice Department's civil rights division. "We do not want a single incident that is a preventable incident to occur. We have a shared interest in making sure reforms are implemented as soon as possible."

The findings, called "grave and serious" by federal officials, come 15 months after the feds' announced their investigation, a move spurred, in part, by a spate of high profile police shootings involving mentally ill Portlanders. And, significantly, the results come with full buy-in from Mayor Sam Adams and Police Chief Mike Reese.

"Let me make clear: There is no daylight between what the Department of Justice is asking us to do and what we want to do as the Portland Police Bureau," Reese said, before adding that he also thought "officers aren't the folks to blame."

Outrage over police conduct flared in recent years after federal lawsuits over the 2006 police beating death of James Chasse Jr. and the 2010 shooting of Aaron Campbell, an agitated and unarmed African American man killed during what was supposed to be a welfare check. After Campbell's death, community groups and Adams and Commissioner Dan Saltzman all petitioned the DOJ to step in.

From the start, unlike in other cities facing a federal investigation, the mayor's office and chief's office had pledged close cooperation with investigators—unveiling, throughout the 15-month process, policy initiatives and reports meant to help address what's still a vexing problem.

The bureau, as the Mercury first reported, is working on a new mental health response unit. The city, also as the Mercury first reported, is looking to have more 911 suicide calls diverted to mental health professionals—either before someone calls 911 or after. The bureau has a new step-back policy in which mentally ill Portlanders who aren't actually committing a crime will be left alone until they're less agitated. The bureau also fired the officer who shot Campbell, Ron Frashour—a decision the mayor has spent hundreds of thousands of dollars trying to enforce after an arbitrator overturned it.

Other changes include having sergeants monitor use-of-force reports, the creation of a new Training Advisory Council (which will have open sessions, the mayor confirms, despite the police bureau's initial stance that all meetings would be closed). And, in a shift, the bureau has decided to abide to new restrictions on Taser use—acting, at last, despite years of other community reports urging them to tighten Taser use.

Meanwhile, although the wave of shootings that sparked the investigation eventually calmed down—culminating chiefly with the 2011 shooting of homeless man Thomas Higgenbotham inside a SE 82nd Avenue carwash—the number of shootings has ticked back up in recent months. Portland police have been involved in four shootings this year inside Portland. One of those killed was Bradley Morgan, a suicidal man who waved a replica handgun at Portland cops before they shot him atop a downtown parking garage.

It's unclear, though, whether the city can afford those changes, some of which will cost millions of dollars that simply aren't there in a time of budget challenges. Adams says he's hoping health care reform will free up money for some of the changes, noting how expensive the current model of shuttling patients between emergency rooms and jail cells has been.

In what came off like a pre-emptive move last week, the bureau released a report showing its use of force declining by more than a third over the past four years, including its use of controversial weapons like Tasers, which dropped 40 percent from 2008 to 2011.