UPDATED: Can City Hall Protesters Just Come Back Every Night at 9? (Yes, They Can) 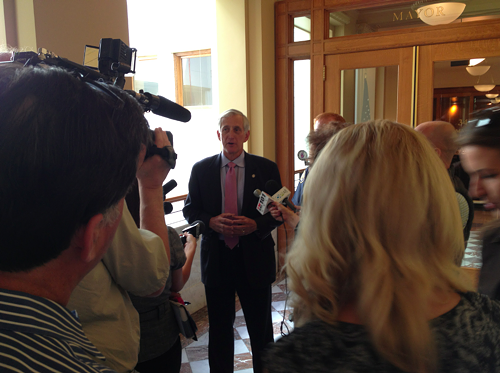 Mayor Charlie Hales this morning redoubled his attempts to publicize a plan announced over the weekend that would use power-washers, cops, and citations to disperse—maybe tomorrow, but "sometime this week"—the nearly two-year-old camping protest that's taken root outside the SW 4th entrance of Portland City Hall.

"This building is owned by 600,000 people," Hales said during a media scrum outside his offices around 11:30 this morning. He said everyone should count on safe access to the headquarters of the city's government. And, citing reports of sex, drugs, and harassment and fights, Hales said the protest has "gotten to the point where that's no longer true."

Hales tied this to his efforts to work on homelessness issues and the related subject of aggressive panhandling, talking of nighttime outings with social service workers and promising to continue to send service providers out to the camping protest. But the timing and mechanics of the planned sweep—and the reasons for it—raise a few important questions.

• For one, the Portland Police Bureau admitted at the press conference that while they throw around a "113 calls for service in 180 days" stat, they don't actually know how many of those calls were for crimes or resulted in actual cases. Some were reports and check-ins on cops' computer-assisted dispatch system.

The sense of disorder, which came up at almost exactly the same time last year before fading away in the face of enforcement and power-washing (but not a full sweep), is a key part of the mayor's rationale. So is PR, apparently. Hales repeatedly said he acted, when pressed by reporters eager for some credit in driving the story, partly because journalists started putting stories about dope-smoking on TV. It's also maybe no coincidence that this is happening just weeks after, because of budget cuts, Hales dialed back private security at city hall.

• It's also unclear, for now, whether the main tool the mayor has proposed for keeping protesters and campers away—designating parts of SW 4th's sidewalks a "high pedestrian use" zone where no one is allowed to sit or lie down—will work as intended. The city's sidewalk management ordinance is operable 7 am to 9 pm, and Central Precinct Commander Bob Day told me, when I asked the question, that he wasn't immediately sure whether that time frame affects the special pedestrian designation or if that designation is in effect 24 hours.

On the question of hours of enforcement:

The ordinance will be in force from 7 a.m. to 9 p.m. During that time, a person may stand and move about. They may have property with them – but at hand and moveable.

After 9 p.m., and until 7 a.m., you can roll out a sleeping bag and sleep. At 7 a.m., that person will have to become a pedestrian again. The city won’t be asking you to move along, just not be lying down in violation of the sidewalk-use code. 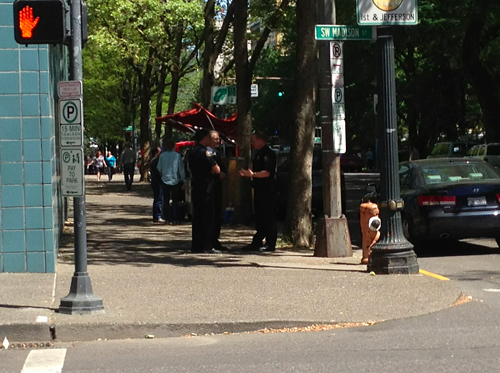 Hales also said he can't declare that special exemption everywhere: "That would be bogus," he said. But when asked why he declared that now, given that city hall didn't previously receive that designation even though it's been available for years, he assured there are "thresholds that qualify" the frontage on SW 4th.

"It isn't just a police decision," he said, taking shots at the Adams administration for not driving the protest away once and for all.

Having the right to sleep from 9 pm to 7 am wouldn't do much for the visibility of a protest, but it would allow sleep in one of the safest and most watched public spaces in Portland. That's important, because homelessness isn't going away. But the cops might also start rigorously enforcing rules about bedding and tarps.

• What about free speech? Hales' office tells me a separate religious vigil on camping and safe sleeping will go unmolested. For now. But Hales has talked about food carts on the plaza outside city hall, his spokesman said in the hallway after the press conference, which could force the tent housing that vigil out. "The mayor does want to talk about that," spokesman Dana Haynes told me.

But Hales unequivocally said he doesn't see camping as a form of protest, even outside a government building, even though the protest is about the government's policies on housing and camping. "I expect the sidewalks to often be filled with protests," he said, but added, when I pressed him about camping as a medium of protest, "I do see a difference. That's a practical reality."

• Did Hales kick a hornet's nest? Asked if he expects violence "this week" when cops clear the protest, he said, "I certainly hope not." But word has come out to bring people down for the sweep, which is one reason why the cops and Hales' office are playing coy with a firm date and time. Day says cops won't try to enforce sidewalk rules during the push. They'll declare the sidewalk cleared for reasons of public safety and cite and/or arrest anyone who stays for defying a lawful order by police.

Last year, after the summer swell and some frequent visits by a police sergeant and other officers, the bad elements at the protest thinned out and faded away without a major clash. Drug use is pretty indefensible, and the city is right to want to root that out. And some people have clearly stepped over the line and abused the soft welcome the city has given over the past several months. But absent that, which can be handled with cops working their beats, if it's just about looks and appearances, then that's the point. Protests are supposed to make people feel uncomfortable and be noticed. 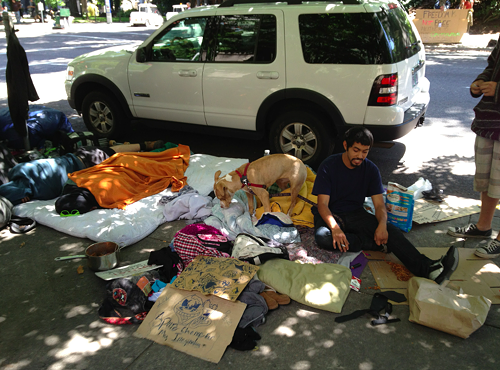 The scene outside city hall was more festive and energetic than it's been in weeks. It's clear some campers are going to stay until they're dragged off. (The city's recent camping lawsuit settlement requires more notice and better handling of their stuff, when that happens.)

Says Andrew Gross, 20, who's been at the protest for two weeks: "We're the people of Portland. We deserve the right to occupy public space, whether it be a sidewalk or a park. Now they're splitting us up like we're bad people. We're good people."