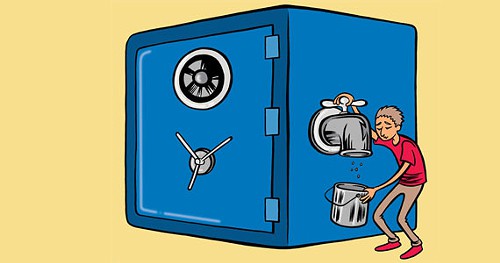 So you read our story this week on municipal bonds and you got interested. Real interested. But news stories are like veins, right? You can only tap them so many times for that crucial high. You need a fresh line. (I have no idea if this lingo or information is correct.)

Anyway, I'm back, and I've got more context.

The basic point of this week's story is that Portland's water and sewer bureaus' strong credit ratings allow us to borrow millions of dollars at cheaper interest rates.

And one of the things that help the utilities get such favorable marks is a willingness to raise sewer and water rates—the targets of an aspiring ballot measure— to cover costs and debt payments. If we stopped raising those rates, while at the same time continuing to pursue projects we're locked into (think the federally mandated burying of the water reservoirs), it's possible Portland could be downgraded. Then we'd almost certainly attract higher interest rates.

Here's the example I used in the piece.

At the Mercury's request, the city's number crunchers offered some quick calculations. For a $50 million bond sale, with a life span of 25 years, a 4.5 percent interest rate would result in $86.2 million in total costs. At 5 percent, that would increase to $90.6 million. At 5.5 percent interest, the city would pay $95.1 million.

So a 1 percent difference in the (hypothetical) interest rate cost the city $9 million. And that's just for a (hypothetical) $50 million loan. Portland's water and sewer bureaus' most recent loans are in the hundreds of millions range.

I wanted a sense of what kinds of rates other cities are getting for their water and sewer bonds, so I called around. Bond sales are intensely complicated, and interest rates rely on more than just credit ratings. The state of the bond market when a city decides to borrow is also crucial.

Here are some examples. (The rating system I'm using is from Moody's. It's pictured to the right (though it actually goes all the way down to 'C').)

•The Portland Water Bureau borrowed almost $243.3 million in April of this year.
Bond rating: Aa1 (though the system as a whole has a Aaa rating)
Interest rate: 2.96 percent.

Why's that BES interest rate so relatively high, even though the rating is decent? I'm not sure, but I suspect it's got to do with the state of the bond market in September.

Toby LaFrance, Tigard's finance director, mentioned when we spoke that cities have been able to borrow at extraordinary interest rates lately, but that those rates are rising.

"Our nation as a whole is actually going to be in for a bit of a shock when we return to the historical norms," he told me.

Incidentally, LaFrance is very happy with the city's 4.03 percent interest rate, given Tigard's bond rating. "For our bonds," he said, "we hit a really good sweet spot."