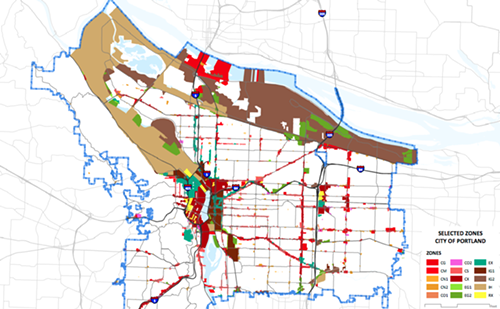 See that pretty map up there? Central Eastside businesses claim each technicolor blob will be free to host homeless camps if Mayor Charlie Hales and Commissioner Amanda Fritz succeed in moving homeless rest area Right 2 Dream Too (R2DToo) across the river.

Those blobs mortify these Central Eastside businesses. R2DToo fight 2.0, it seems, is officially upon us.

The map was provided—to the Mercury and to Portland City Council—by the influential Central Eastside Industrial Council (CEIC). It accompanied a letter we all knew was coming: A 10-pager [pdf] that calls the proposed R2DToo relocation an illegal perversion of established Portland planning process, relying on "contrived" logic that bends zoning rules.

"This decision could lead to 10, 20, 30 or more tent camps throughout the City," says the letter, signed by CEIC heads Debbie Kitchin and Brad Malsin. "This issue is far too important for all of us to simply act and hope for the best result."

The letter delves deep into city code to make a case that R2DToo isn't allowed onto the proposed lot by right, as Fritz and Hales have said. It's a detailed argument but I'll try to make it simple.

Back in 2013, when Fritz announced plans to move R2DToo from beneath the Chinatown gate to a lot underneath the Broadway Bridge, the city's top zoning code enforcer, Paul Scarlett, weighed in on the proposal in a detailed decision [pdf]. Scarlett found R2DToo qualified as a "community service" under zoning law, and would be allowed on the lot.

The thing was, Scarlett decided R2DToo didn't really correspond to any of the uses specifically listed under "community service" in the code. Mass shelters are given as examples of community services. So are short-term housing developments. But Scarlett said neither of those applied to R2DToo.

That was an important and convenient finding. Designating R2DToo as a mass shelter or short-term housing would have required detailed land-use reviews. Scarlett's opinion neatly scotched any need for those, and might have allowed for a quick move. But it was never formally adopted by city council. Pearl District developers succeeded in killing the move before that happened.

The CEIC's clearly hoping for a similar outcome.

"We're not in favor of this, and there are issues we feel are of concern," Kitchin, a local contractor, tells the Mercury. "We're opposing the move but also raising concerns about the whole issue of outdoor camping."

The letter Kitchin sent the mayor and commissioners on May 22 makes the case Scarlett was way off base in his earlier finding. It notes that tent camping is clearly illegal under city law—that's the reason police are currently pushing people out of the Central Eastside in droves—and that it's wrong to make a distinction between R2DToo and more generic camping. They also say that, since a rest area like R2DToo isn't specifically listed under examples for "community service," the city needs to formally put it into the code.

"We are asking you to lead," the letter says. "Take this issue that has been so divisive and use it to bring the community together towards a common objective." 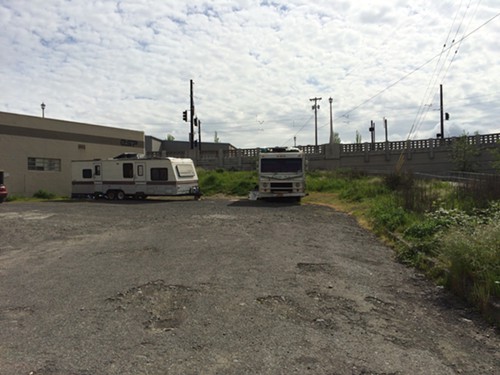 There are other points raised—including that the proposed site may be too contaminated to support campers—but the CEIC's central argument is the map. The group says that, if the city installs a homeless camp on the proposed site with no process, it would allow the same type of installation not just on other plots with the same zoning, but plots of "over 14" different zoning designations citywide.

"Under the interpretation advanced by BDS, anyone wishing to avoid the City's regulation of mass shelters can simply establish an outdoor shelter, call it a tent camp, and place it anywhere a Community Service use is allowed with a willing property owner," the letter says.

That's probably an oversimplification. Scarlett's decision relied in part on the fact R2DToo is a nonprofit organization. It's far more organized and strict than "a tent camp," which is why it's won the goodwill of city leaders, neighbors, and police.

What happens next is unclear, but CEIC is saying many of the same things that Pearl District developers did in 2013: It wants to help R2DToo continue its mission, preferably somewhere indoors, but the currently proposed site isn't acceptable. City staffers have said it's the first workable location they found after more than a year of searching.

"We're trying to put a deal together with Right 2 Dream Too," Kitchin says. (It should be noted Pearl District developers succeeded in a "deal" of their own when they killed the proposal to move R2DToo under the Broadway, kicking in $846,000 to find the rest area a new home.) CEIC members have also been tossing around ideas for other sites where R2DToo could move. One possibility Kitchin mentioned was on NW Naito, far from the Central Eastside.

It's unclear how much sympathy the CEIC's outcry will find in city hall. The group's board of directors includes people from a large segment of Eastside businesses, ranging from OMSI to the Portland Spirit to Franz Bakery. And its website proudly touts its independence, calling itself "one of the last organizations to NOT receive any financial assistance from the city, so they have no influence on us. We only work for the betterment of the district, the property owners and the businesses in the area – whether the city likes it or not."

Hear in Portland: Two New Must-See Videos, A Stellar Lineup at The Thesis, and an Upcoming Federale Project