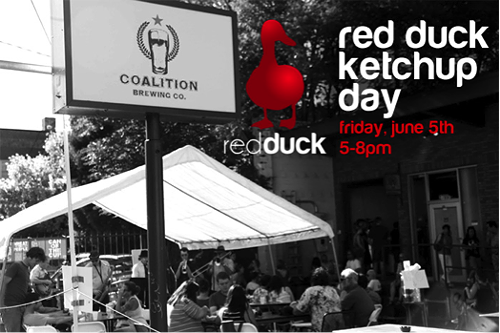 There are some silly National Something-or-Other Days out there, but this Friday, June 5, tops them like an all-you-can-squirt fixin's station. It’s apparently National Ketchup Day, and the third annual one at that. Enter a malty homage to tomato paste and vinegar: two collaboration beers from Portland’s Coalition Brewing (who are gearing up for their fifth anniversary) and Portland-via-Eugene’s Red Duck Ketchup. Yes, the event held at the brewery will feature two ketchupy beers. Because “catsupy beers” just doesn’t sound right.


The first offering, Micheladuck, is a condimentary take on the michelada beer cocktail that’s usually made with an American light lager and tomato juice—or worse, Clamato. While Midwesterners are already well-versed in the arena of red beers, this one features a light malt base, Red Duck’s spicy ketchup, lime juice, lime zest, and sea salt. Says Coalition co-owner and brewer Elan Walsky, “The sum of the parts results in a surprisingly balanced and drinkable beer. The nose presents with spice and citrus, preparing you for a spicy first sip, which is mellowed by malt sweetness and cleaned-out tartness.” It’s 6 percent ABV and 10 International Bitterness Units.

This event is all-ages and open to the public, and the first 50 attendees aged 21-and-over will receive a free ketchup beer, while the first 100 in attendance will get a ketchup-topped frankfurter from Olympia Provisions. Red Wagon Creamery will be scooping samples of, go figure, Red Duck Molé ice cream.

Fifteen days later, return to the scene of the tomato-stained crime to celebrate Coalition’s fifth anniversary on Saturday, June 20. There’ll be games, live music, food specials, and more in the all-ages and pet-friendly setting—but the real attraction is the return of early Coalition favorites such as Mr. Pig’s Pale Ale, Hanso vs. Bulleit (Hanso Stout aged in Bulleit Bourbon barrels), Wu Cream, and Apollo Creed CDA. Expect several new barrel-aged and sour beers as well to mark the auspicious occasion.

Multnomah County Could Reopen as Soon as June 12

Today's Coronavirus News: More Than 100,000 Americans Have Died Due to COVID-19