Yes, Homelessness is Growing in Portland, But Not As Fast As You Might Think

Portland police say Portland's homelessness situation has reached a tipping point. Since May 26, they've been scouring the Central Eastside most days to push out the "entrenched" campers who've taken root there—steering them toward social services where possible, but otherwise basically telling them to find another place to live.

So what's the actual state of homelessness in Portland as people flock to town, rents shoot up, wages won't budge, and many minority communities are in worse fiscal shape than they were a decade ago? According to the best data we have, it's on the rise—but not by much.

A snapshot of homelessness [pdf] just released by the Portland Housing Bureau suggests Multnomah County's homeless—defined as people staying on the street, in an emergency shelter, or in transitional housing—have increased by roughly 4 percent, when using the same baseline as 2013's study. More African Americans and families and women are sleeping on the street (as opposed to in shelters or transitional housing) than two years ago. There are fewer "chronically homeless" individuals. And the findings actually uncovered fewer people sleeping on the street than in 2013, though the difference was only 8 people and is probably meaningless given the vast uncertainties of the report.

The "point-in-time" homelessness count has a ton of caveats. It's carried out at the behest of the US Department of Housing and Urban Development (HUD) every two years, and it's mandatory for cities and counties that rely on federal funds to fight homelessness (as we do). But the point-in-time nature of the report, along with shifts in HUD requirements, make it tough to get an actual picture of the problem.

For instance, in HUD's eyes, Multnomah County's homeless population actually decreased in the last two years. That has no bearing on the actual situation on the ground. Rather, it's a reflection of HUD tweaks that took more than 800 beds of "rapid re-housing" out of consideration this year.

So while the official numbers show 3,801 homeless people on January 28, compared to 4,441 in January 2013, that's a pointless distinction. Using the 2013 HUD definition of homelessness, there were actually 172 more people homeless in Multnomah County earlier this year, a nearly 4 percent increase. That rise doesn't account for population growth alone, according to the study's author, consultant Kris Smock.

In some respects, the results are hopeful. The 2013 report found a 10 percent increase in people sleeping on the streets compared to 2011. This year there's a tiny decrease.

But the new report also takes pains to point out HUD's definitions miss a huge portion of homeless people: those "doubled up" in the couches, spare rooms, or floors of family and friends. Estimates indicate there might be as many as 16,344 people in Multnomah County who fit into that broader definition.

"We recognize there’s a real limitation," says Smock who's authored the last four point-in-time reports. "This is not the full picture of homelessness in our community."

Even the numbers the study focuses on are almost-certainly flawed. The report notes more than 630 people sleeping outside on January 28 whose names weren't collected by volunteers and outreach workers, so couldn't be formally counted. Those people might have been logged on subsequent attempts, but it's impossible to say. (I went out with a team collecting data for the count back in January and wrote about it here.)

Then there's the fact that Portland's homeless population swells and contracts from season to season. Police, politicians, and homeless advocates frequently point to the "travelers" who tend to show up in Portland during the warmer months.

"Things change over the course of the year," Smock says. "There have been discussions repeatedly of whether it makes sense to do a count during the summer to get a picture of the very different of that nature of homelessness. Ultimately the decision has been it takes a lot of time and resources to get a count. We’d rather invest time and resources to address homelessness."

All these caveats aside, this is the best picture we have of the face of homelessness, and it's got some interesting things to say about how we're doing.

For starters, the county's failing people of color. The report suggests racial minorities as a whole are overrepresented by 11 percent in the county's homeless community. The most striking finding, though, was a 48 percent increase in the number of unsheltered African Americans—from 267 identified in 2013 to 396 in 2015.

The increase "is highly troubling and deserves immediate attention," the study says. "Policy makers and service providers should work together to identify the specific reasons for the increase and to develop strategies to address this growing disparity."

The results aren't occurring in a vacuum, of course. Smock notes black Portlanders' median incomes are less than half of whites'. According to a State of Housing report recently released by the housing bureau, whites are the only racial demographic in Portland doing better, income-wise, than they were in 2000. 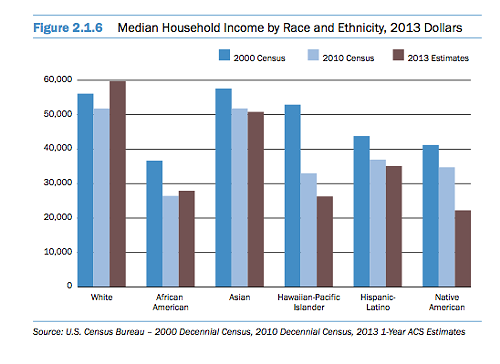 Multnomah County Chair Deborah Kafoury, co-chair of the new Home for Everyone board that's tackling homelessness, tells the Mercury she's "appalled" by those findings.

"This shows homelessness is about the economy," Kafoury says. "When you look at apartment vacancy rates as low as they are, and rents as high as they are, it's really no surprise that people can't find a place to live."

So what's being done to curb this stuff? The city and county are throwing their support behind new money for affordable housing, though it seems finding suitable sites for said housing is a constant struggle. And there's new money to keep emergency shelters for women open year-round, rather than limiting their operation to the cold rainy months. The Home for Everyone board has also made ending veterans' homelessness a focus, with Mayor Charlie Hales' vowing to get veterans off the street by November 11, Veterans' Day. The Portland Tribune had a helpful roundup last week.

But the relative stasis in Portland's homeless numbers—compared to cities like Seattle, which has seen a 21 percent increase in its unsheltered population in the last two years—suggests to Kafoury that much more needs to be done. "If we continue doing exactly what we're doing today," she says, "we're going to get the same results."

That includes the sweeps still playing out in the Central Eastside, actions Multnomah County's top official finds worrisome. "It concerns me," Kafoury says. "Moving people from one place to another without giving them options—that's not the answer. The answer is to get people into housing."