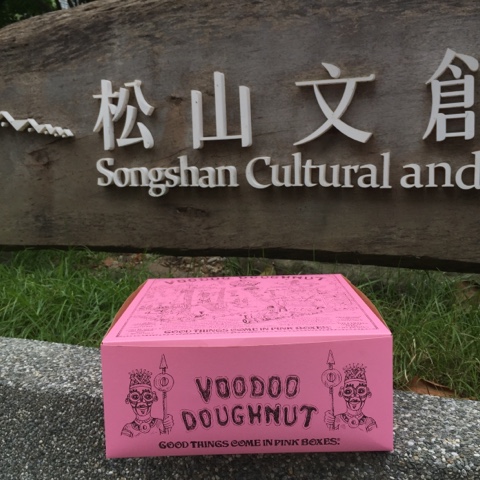 One of Portland's fave tourist spots and late-night doughnut purveyors, Voodoo Doughnut, has expanded their operations once more—this time in Taiwan! Currently they have three locations in town, plus one in Eugene and Denver, Colorado. And now they can add Taiwan to the list with a just-opened location in the Songshan Cultural and Creative Park. Their "soft launch" went down on June 18, and according to reports, they are planning on opening 12-20 stores in Taiwan as well as Japan in the next three years—but the question remains if an Asian market will take to Voodoo's particular brand of whimsy. From BubbleTea101:

There’s no doubt that business will do very well in the early stages, but the question will be whether Voodoo has the staying power than most other doughnut retailers have found elusive in Taiwan. As the Quartz article mentions, Dunkin Donuts has twice setup operations in Taiwan, only to exit the market on each occasion. Krispy Kreme (which opened in Taipei in 2013) performed strongly at first with epic lines, but the initial buzz has started to wear off. Perhaps Voodoo’s non-conventional offerings will ensure it can carve out a niche in the market.

The Taiwan location definitely has the attention of the locals since its soft opening, and has already been reviewed by one English-speaking food blogger, who had never eaten Voodoo Doughnuts before, and seemed particularly enamored with the Bacon Maple Bar... and not so enamored of the prices in Taiwan which, according to her, came out to be $30 American for 15 doughnuts. (She was apparently used to Krispy Kreme pricing.) Regardless, she published some great pictures of the Taiwan location, so check those out as well as her review here at A Hungry Girl's Guide to Taipei.