A couple weeks ago, I bemoaned in print how difficult it is to get a comprehensive sense of incoming affordable housing in Portland. While there's plenty of dissent about how this city should handle displacement and gentrification, everyone agrees we've got a dearth of affordable options (typically regarded as reasonable for people who make 60-80 percent of the median family income or below).

In a startling report [pdf] issued earlier this year, Housing Commissioner Dan Saltzman wrote of the " dire need to increase affordable housing stock throughout the city."

It was surprising, then, to see that the Portland Housing Bureau didn't have a ready roster of upcoming projects available on its website. We asked for a snapshot in mid-June, and got a spreadsheet from the bureau today.

This data is subject to change week by week, the bureau makes clear, but it offers a useful picture. The first table shows a list of 19 projects the bureau's currently working on, totaling new 993 new affordable units coming down the pike (since 97 of the 1090 shown are rehabs of existing units). The second lists seven projects where developers are making at least 20 percent of their units affordable so they can tap tax breaks the city offers. Those include 244 new units.

According to the PHB, more than half of those (527) will be available before the end of 2016—in a mix that includes four properties in East Portland, four projects near the downtown core, and three in the relatively close in east side. That might seem like a lot, but it's really not. According to the "State of Housing" report I mentioned above, Portland added about 7,300 affordable units between 2000 and 2011, an average of about 663 a year. The PHB's numbers for 2016 suggest only around 347 units will be added (though it could be slightly higher, since estimated end-dates aren't included for all projects). 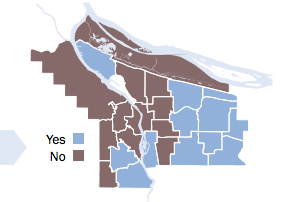 The City of Portland plays a big role in the metro region's affordable housing landscape, contributing funding to 65 percent of the affordable stock here. But the housing bureau notes that "a structural misalignment exists between the affordable housing goals established by the city and the funding available to implement programming." In this year's sanguine and cozy budget discussions, the question of how much Portland puts toward affordable housing was one of the only sticking points (though it didn't spur a fight of any sort).

The vast majority of the affordable housing that exists in town is toward the center city, which is partly good. Close-in Portland is increasingly unaffordable to low-income residents (in the map to the right, only the blue areas are affordable to an average 3-person family making 60 percent of median family income).