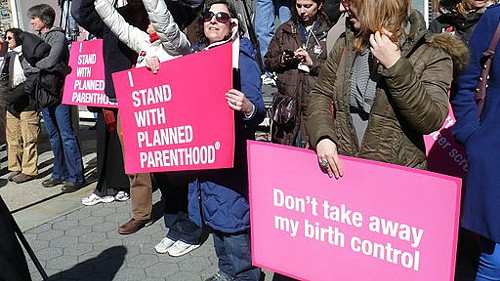 It's that time again: When hard-line anti-choicers call for defunding Planned Parenthood, aka the organization that probably almost every lady you know has gone to for health care at some point in time. Luckily, yesterday's Senate vote to defund the women's health-care organization failed, but the GOP's impetus for trying—the latest ~*sting*~ from anti-choice hatchet-job-happy group "the Center for Medical Progress," which has ties to the equally cray anti-abortion group Live Action, led by shiny-haired lady-Donald Trump ~*Lila Rose*~—is worth deconstructing, in all of its crazy-eyed disdain for both women and facts.

It all started last month, when the CMP launched a malicious smear campaign against Planned Parenthood, releasing videos of secretly recorded conversations with high-level employees of Planned Parenthood. The videos are deceptively edited (like there's an eight-minute unaccounted-for time lapse at one point) to make it seem like Planned Parenthood is taking a slow-mo money bath from selling aborted babies. Oh, except they don't actually sell baby parts at all, turns out they just give patients THE OPTION to donate fetal remains for scientific research, which is 100 percent legal, and they don't make money from it, although they will sometimes be compensated for costs incurred by the donation process itself.

Just for fun, here's how you can support Planned Parenthood Columbia Willamette.

If you feel like getting SUPER FUCKING ANGRY, Media Matters and FactCheck both have a whole breakdown of the videos' misleading cuts (including a segment where on PP rep actually says, "nobody should be 'selling' tissue. That's just not the goal here," which, you know, I GUESS YOU'D HAVE TO IGNORE IF YOU WANT TO GIVE THE IMPRESSION THAT THE OPPOSITE IS TRUE *screams forever*). But there is one shining beacon of hope in this horrible mess, which is that Katha Pollitt, longtime advocate for reproductive rights, has weighed in with a wonderful op-ed in today's New York Times. Here's what she has to say about dealing with this garbage:

There are two reasons abortion rights activists have been boxed in. One is that we’ve been reactive rather than proactive. To deflect immediate attacks, we fall in with messaging that unconsciously encodes the vision of the other side. Abortion opponents say women seek abortions in haste and confusion. Pro-choicers reply: Abortion is the most difficult, agonizing decision a woman ever makes. Opponents say: Women have abortions because they have irresponsible sex. We say: rape, incest, fatal fetal abnormalities, life-risking pregnancies.

These responses aren’t false exactly. Some women are genuinely ambivalent; some pregnancies are particularly dangerous. But they leave out a large majority of women seeking abortions, who had sex willingly, made a decision to end the pregnancy and faced no special threatening medical conditions.

We need to say that women have sex, have abortions, are at peace with the decision and move on with their lives. We need to say that is their right, and, moreover, it’s good for everyone that they have this right: The whole society benefits when motherhood is voluntary. When we gloss over these truths we unintentionally promote the very stigma we’re trying to combat. What, you didn’t agonize? You forgot your pill? You just didn’t want to have a baby now? You should be ashamed of yourself.

You can read the whole thing here. Last year, Pollitt and I talked on the phone while she was on a book tour for her pro-choice polemic, Pro, which advocates for the same outspoken support of abortion rights. Now might be a good time to revisit it.