Remember When Everyone Was Mad About Water Rates Last Year? Here's What Came Of It 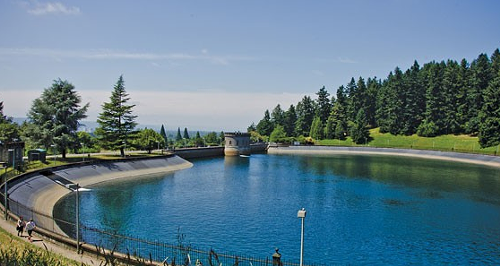 Remember a year and a half ago, when everyone gave a very specific damn about the governance of the city's water and sewer rates? In early 2014, city leaders were frantically trying to quell an insurrection that would have snatched the Portland Water Bureau and Bureau of Environmental Services from City Hall, and put them in the hands of a vague new board.

That uprising had roots in decision making that ratepayers had a right to question. (The enormous flop that was the Portland Water House probably drew much of the ire, though it amounted to a relative pittance in the grand scheme.) And questionable spending has popped up since the push for a new board went down in flames—most notably in the case of the vastly overbudget and well-appointed wastewater treatment plant BES recently completed in North Portland.

For the most part, though, the clamor and concern over sewer and water services has sunk into obscurity. But here's what's come of it: Today, Commissioner Nick Fish and Mayor Charlie Hales announced the roster of a new "Portland Utility Board" (PUB) they've worked up to oversee how Portland is managing its utilities.

My god this is a board-heavy contraption. Essentially, one board (that'd be the new PUB) will now stand in for the work that was once carried out by three boards (two budget advisory committees and a "utility review board"), in an arrangement that was all dreamt up by a "blue ribbon commission," which is another way of saying "temporary board." Portland!

All that said: This is a group to pay attention to for all of you silently cursing that quarterly water bill. These are the folks who are supposed to look critically at how your utilities are being managed, ensure projects are prudent and necessary, and avoid becoming a rubber stamp.

It's still too early to say how well that's going to work. The 9-member board has yet to establish bylaws, and figure out how long the each of them will serve (eventually terms will be three years, but they've got to stagger it a bit with one and two-year terms at the outset). There will be public meetings every month at least, according to the rules. First meeting's in September.

After the jump, I've pasted the city-provided bios of each PUB member.

Meredith Connolly
Meredith Connolly is the Policy Advisor and Contract Counsel for the International Program of the Natural Resources Defense Council (NRDC). She has a JD from Boston College, and serves as a volunteer for the NW Energy Coalition and the Portland Parks Tree Inventory Program. As part of the NRDC’s India initiative, Meredith works with partners to implement clean energy, public health, and climate policies.

Michael Harrison
Michael Harrison is the Associate Director of Local Relations for OHSU. He is a graduate of Portland State University’s Master of Urban and Regional Planning program, and has 13 years of experience serving on the staff of elected officials. He previously served on the BES Budget Advisory Committee. A fourth generation Portlander, Michael has lived in neighborhoods from Cully and Homestead to Lents and the Northwest District.

Janet Hawkins
Janet Hawkins is the Community Action Coordinator for Multnomah County DCHS Community Services, and has a Master’s in Public Administration from Portland State University. She serves as the current Chair of the Hayhurst Neighborhood Association and on the Board of Directors of the Oregon Fellowship of Reconciliation. Janet was recommended to the PUB by Elders in Action, and has a special interest in how utility rates affect low-income households.

Gwynn Johnson
Gwynn Johnson is an Associate Professor in the Department of Civil and Environmental Engineering at Portland State University, and has a PhD in Soil, Water and Environmental Science. She served on the Governor’s Resilient Oregon Steering Committee’s Water and Wastewater Task Group. Gwynn has worked extensively with issues regarding water, wastewater, and stormwater, including treatment, storage, and conveyance.

Robert Martineau
Robert Martineau is a Water Operations Mechanic at the Portland Water Bureau. He also serves as the Executive Vice President of AFSCME Local 189, where he chairs the Policy Committee. Rob attended all of the meetings of the Utility Oversight Blue Ribbon Commission, and brings knowledge and experience as a front-line operator of Portland’s drinking water system.

Julia Person
Julia Person is the Sustainability Manager at Craft Brew Alliance, home to Widmer Brothers Brewing, Oregon’s largest craft brewery. She has a Master’s of Urban and Regional Planning from Portland State University. Julia is a Certified Energy Manager and member of the Association of Energy Engineers, and brings the perspective of large water users.

Kendra Smith
Kendra Smith is the Director of the Model Watershed Program in Oregon for Bonneville Environmental Foundation, and has a Master’s of Science in Ecosystems Management. She served as a member of the Utility Oversight Blue Ribbon Commission. For 12 years, Kendra was Water Resources Program Manager at Clean Water Services. She serves on the Metro Greenspaces Capital Grants Selection Committee and the Portland Urban Forestry Commission.

Allan Warman
Allan Warman is the Director of the Key Customer Group at Portland General Electric, and has a Master’s in Applied Economics from PSU. He has worked mostly in the private sector since 1980, including a long tenure with The Boeing Co. as an Energy and Conservation Manager. Allan has served on numerous non-profit boards. Currently, he is on the board of Oregon Mentors/Institute for Youth Success and the President of the Rocky Butte Homeowners Association and a member of the Portland Business Alliance.