Old Town's About to Become A Lot More Bike-Friendly 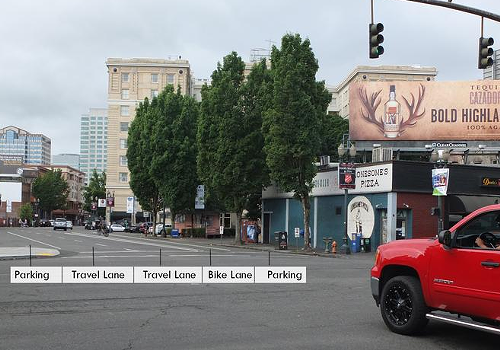 The Portland Bureau of Transportation is planning to chop one lane of automobile traffic on the mini-freeway that is 3rd Avenue, between Davis and Stark. That was first reported yesterday by bikeportland.org. For a cost of $40,000 (between installation and outreach/planning) the bureau plans to set up shop in the very spot where 3rd's bike lane inexplicably disappears at NW Davis, and extend the new lane six blocks south.

This is a remarkable situation in a lot of ways—particularly for downtown. Old Town's business owners have shown a lot less reticence than many around the city in pushing for new bike amenities. Last year, the neighborhood welcomed an unprecedented (in Portland) experiment to reshape NW and SW 3rd Avenue—a shift that gave bikes and pedestrians (gasp!) the same priority as cars for a long weekend.

The lane the city's planning will transform an entire car/bike lane into a bike-only lane (except for a small "mixing zone" north of Burnside). It'll have sizable buffer areas on each side to distance bikes from traffic and parked cars. That's not as ideal as a lane that's physically separated from car traffic—something the city's currently looking into, but it's far better than the sloppy, too-wide mess on this stretch of 3rd today. Andersen notes that the new project will amount to the only "buffered" bike lane downtown, making it one of the better bike facilities Portland has in its most traffic-choked region.

This is also the first permanent change to Portland's streets stoked by Better Block PDX, the group that masterminded last year's experiment in Old Town, but the impetus extends back to before that group existed. It had its roots in an advisory group—made up of Old Town businesses, social service providers and residents—that had been grappling with how to improve the weekly street closures in Old Town's entertainment district.

"We realized street reconfiguration could be a quick, easy, positive, incremental fix," says Ryan Hashagan, a member of the group and owner of Portland Pedicabs. "It could create a safer neighborhood."

The idea led to the involvement of Better Block, which set up a three-day demonstration. "That was kind of when the neighborhood started to say 'yeah we’re interested,'" says PBOT spokeswoman Hannah Schafer.

(Better Block was also responsible for toying with bike lanes on Naito during the Rose Festival and Oregon Brewers Festival earlier this year, something we highlighted in a piece about Portland's resurgent bike activism in June.)

The planned bike lane is just phase one of changes coming to the area. PBOT's also working on a scaled-down version of the public plaza Better Block set up in front of Voodoo Donut.