Here's a crazy figure: In the last year, average Portland rents rose by more than 15 percent, according to a Texas firm that studies rental markets.

If that's true—and the company, Axiometrics, says it's confident in the finding—rent in Portland is likely rising faster than at any point in the city's history. It's also rising faster here than in any other city in the country. Portland isn't yet the walled city that San Francisco has become, or Seattle's marching toward, but it's getting there—and quick.

The actual findings: From August 2014 to August 2015, rents in Portland rose by 15.4 percent. That edges out Oakland which previously had the fastest growing rents. Axiometrics actually expects that growth rate to cool a bit toward the end of the year, resulting in a 10.5 percent increase overall in 2015. Even if that happens, it's the largest rent increase Portland's seen in decades. (Home prices are rising too. According to the National Association of Realtors, the median price of homes in the area has shot up by 10 percent in the last year.)

Below is a snapshot of a newsletter Axiometrics released recently. It suggests that rents from August 2013 to August 2014 increased by just 5.4 percent, but shot up by nearly three times that in the year that followed. The company's clients are big real estate investors, who are no doubt licking their chops at the favorable market. Depending on where you fall in the heated debate about the city's growth taking place right now, that's either helpful or terrible. 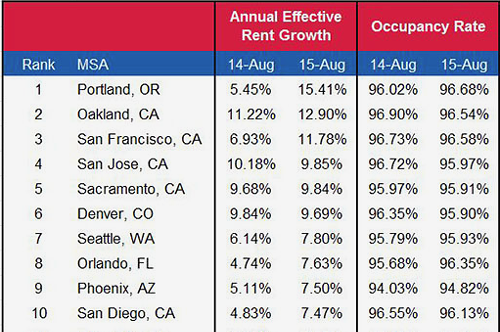 According to data Sanjay sent along, Portland's next largest increase occurred in 2011, when rental rates grew by by 7.5 percent. The company's latest estimates smash that number. Sanjay says it's largely tied to jobs.

The US Bureau of Labor Statistics says the Portland area has added nearly 43,000 jobs in the last year. But the city only built something like 5,000 new rental units in 2014. Sanjay anticipates it'll add around 4,600 this year.

"You're looking at job gains right now that Portland's never seen before," he says. "That's substantial."

As I say, Axiometrics stands by its numbers. Sanjay says the firm employs whole teams of researchers that call around to various markets inquiring about home prices, and is able to glean a good deal of rental data from online databases. It also has clients regularly reporting rental rates.

But it's not hard to look around and find a different claims. The site apartmentlist.com recently suggested Vancouver, Washington is actually crushing the nation in rising rents, and that Portland's rent growth was a mere 7.2 percent. Apartmentlist compiled that data, though, using only listings on its own site.

Multifamily Northwest, which studies Portland rentals extensively, declined to say whether it thought Axiometric's findings were feasible, saying it plans to release a report next month.

The numbers bandied about here will be believable to the many Portlanders who've been pushed out of their homes as new jobs and residents far outpace the production of housing (and whose wages aren't keeping pace with housing costs). As we've reported, the problem has grown to the point renters advocates are declaring a housing "state of emergency," and housing commissioner Dan Saltzman has introduced stop-gap measures aimed at giving renters more notice before they're tossed from their homes or assigned higher rental payments.

124 City, County Employees Fired Tuesday After Refusing to Get Vaccinated