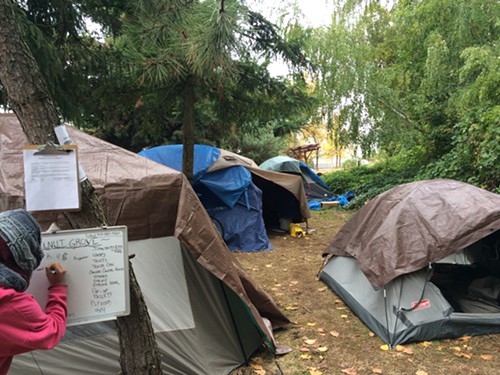 By the time the state executed its long-promised sweep of a homeless encampment on N Greeley and Interstate this morning, it hardly mattered.
Sponsored

As Multnomah County inmates cleaned up a couple tents pitched on state-owned land toward the south end of the property, the cluster of tents known informally as "Hazelnut Grove" had become the second-most organized encampment in the city (after Right 2 Dream Too)—and there's no indication that'll stop any time soon.

In the last week alone, the dozen-plus campers crowding onto City of Portland property have formed a general assembly that plans to meet once a week. There is a code of conduct (shown below), and a mess area complete with dishwashing buckets, camp stove, and a hard-to-track number of French presses for coffee. There's a white board—known as the "opportunities board"— that includes a camp wish list, the numbers of advocates, and general announcements.

So while the prisoners hustled off a couple tents nearby, people who've flocked to Hazelnut Grove lounged in comparative peace this morning. Some played Magic the Gathering around a patio table. Others read, or brought breakfast. Someone had rolled a joint.

"We've waited for years for lightning to strike," said Jose Serrica, a pastor and homeless activist who sometimes sleeps outside of Portland City Hall in political protest. "It just so happens it happened here."

The increased organization at Hazelnut Grove in the last week appears partly due to the arrival of Serrica and others who've shared in his cause near city hall. They were drawn to the camp in part through the efforts of Vahid Brown, an advocate who's been ceaselessly lobbying the city on behalf of the Greeley camp.

"When it became clear the city wouldn't sweep," Brown said this morning, "this camp was gonna be a magnet. I wanted people who were down for organizing to come in." To that end, here's the code of conduct (which, yes, this morning's joint might have flown in the face of).

As long as things remain clean and peaceful, there appears to be no end in sight for the camp at Hazelnut Grove. Last night the Overlook Neighborhood Association, which wrote a sharp letter [pdf] to the city opposing the camp, took up the matter at its monthly meeting. As mayoral staffer Chad Stover explained Mayor Charlie Hales' recent announcements around homelessness (a "state of emergency" he'll use to subvert zoning code, new outreach efforts, and homeless storage spots to name a few) neighborhood residents had sharp questions.

"It's always the east side" that takes on new societal burdens, one man suggested. "It's always North Portland that you guys turn to. The city has to be more accountable."

Another woman wanted to know if the city's toniest neighborhoods—West Hills, Irvington, Eastmoreland—would also be asked to accommodate the city's homeless.

Stover couldn't say, but he danced around what other members of the mayor's staff have said in recent weeks: that the Hazelnut Grove site won't be swept as long as its not causing problems.

"We're looking for responsible management from the folks who are there right now," Stover said.

Overall, it must be said, the neighborhood association was relatively calm last night when it came to the camp. That was likely due in part to Raven Justice, one of the first campers to pitch a tent on the Greeley plot, who laid out for attendees how he'd come to stay there, and the fact that he was out of options.

"I'm doing my damnedest to make Greeley a really nice spot," Justice said. "I can't get into shelter. If your emergency thing can fix that, I'll be the first to jump on it. It not, I'm gonna stay where I am."

And it's clear the emergency has helped along organization at Greeley. Joseph Bennie, a homeless activist who came over with Serrica, told me this morning: "When they declared the emergency, we felt it was time to test them. We have been lied to by the city so many times."

There's still uncertainty about the state's role in all this. The land on which Hazelnut Grove sits is a hodgepodge owned by the state, county, and several private entities. It looks like this. While ODOT cleared up a portion of its land today, it still owns two plots that appear to be holding campers. Department spokesman Don Hamilton says sweeping those lots "could be in the cards in the days ahead."

For now, Hazelnut Grove has one main aspiration: It's pressing the city for portable toilets, which Hales' office has said repeatedly it hopes to provide.