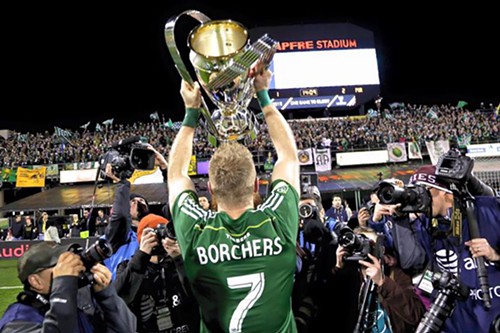 In the end, the Portland Timbers were the best.

And it wasn't all that close.

A run that started with a simple formation change on a sleepy Wednesday night in October ended in ecstasy on a bitterly cold Sunday night in Columbus with victory in a championship game that was every bit as wacky, tense, jaw-dropping, and life-affirming as a golden occasion should be.

The Timbers beat the Crew 2-1. Nothing — not even goalpost revenge — could stop what we saw with such pride becoming an unstoppable march towards the top of the American soccer mountain.

Portland, for the first time since 1977, you have a major sports championship. It's the Timbers' first ever title, in any division, an even four decades after they were founded as an NASL franchise in 1975. The team arrives back at Portland International Airport on Monday. Tuesday, they'll celebrate downtown. There's a White House visit coming, with rings and banners on the way as well.

This team deserves every moment. So do you. This is our sport, and, euphorically and unreservedly, this is our finest hour.

The buildup to this championship game was fantastic in itself. It was a beautiful week for and from the Timbers Army, who managed to scramble some 2,000 fans to central Ohio and then out-sing the disgracefully bottle-throwing Nordecke on gameday. For the players and coaches, meanwhile, it was a week of painstaking preparation.

But in championship games, things often go haywire. This one got wacky. Quick. Just thirty seconds into the game, gaffe-prone Columbus goalkeeper Steve Clark dawdled inexplicably on a back-pass and was charged down by the great Diego Valeri, who slide-tackled the ball into the net for the fastest goal in MLS Cup history.

Just six minutes later, it was two under dubious circumstances. Crew midfielder Tony Tchani thought the ball was out of play near the midfield stripe — it was, by a good two yards — but the assistant referee missed the call. Darlington Nagbe stole the ball, and fed Lucas Melano, whose cross was gorgeously headed in at the back post by the indefatigable Rodney Wallace.

Then, with Portland up 2-0, Adam Kwarasey matched Clark. The Timbers' Ghanian goalkeeper flapped at a ballooning header from Justin Meram, and then failed to corral the rebound, opening a goalmouth scramble. Kei Kamara eventually brought the ball down, and slung his shot through Alvas Powell's legs to make it 2-1.

Proceedings slowed and tensed as the first half settled but Portland's defense was immovable. It became more and more clear as the second half progressed that the Crew held the ball, but not the cards.

Jorge Villafaña was scrappy and tenacious and sensational, all but disappearing MLS Best XI selection Ethan Finley. Alvas Powell had his moments, but he too stood tall — and you can't say enough about Nat Borchers and Liam Ridgewell, neither of whom put a foot wrong all game.

Caleb Porter praised Diego Chara as a "machine" after the game, and the machine, as usual, covered an outrageous amount of ground. It was a team effort defensively. Even Valeri pitched in, though his most important tackle came 110 yards from the Timbers' goal.

With some terrific goalkeeping down the stretch, Steve Clark did his level best to make up for his early howler. Kwarasey, meanwhile, never had the chance to make up for his. He wasn't forced into a save all game long.

Clearly, the best team won. But Liam Ridgewell said on Friday that he believed in hard work rather than destiny, and he had a fair point. The Timbers hit the post three times in the second half — with a handball on the line from Columbus captain and four-time MLS Cup silver medalist Michael Parkhurst and an incredible save from Clark on Borchers to boot.

Columbus was extremely hard done by the missed call on Wallace's goal. But the luck more than evened itself out over the course of the game. As those goalposts can tell you, it usually does.

Carl Robinson said after Portland played Vancouver off the field at BC Place four weeks ago that his team could have played for another 90 minutes and not scored. The same was true on Sunday. Columbus wasn't getting a second.

That was thanks in large part to Borchers, who just wanted to retire as a beloved member of Real Salt Lake. Instead, he got wound up leading the Timbers to the Cup in what might be the greatest trade in the history of the city.

The incredible scenes from the post-game celebration — which included a giddy Hank Paulson, tears from Porter, the team's Argentinian contingent face-timing Gaston Fernandez, and Will Johnson and Liam Ridgewell lifting the trophy — will live forever. Nothing in sports lasts like a title does.

It's an incredible feeling. Most of all, though, this is vindication for Paulson, Porter, and Gavin Wilkinson. It's vindication for everyone who bought in, everyone who has ever cared. We've known for a long time how extraordinary this club and everything that goes into it is. Now, the world knows too.

It took almost eight months for this group to figure itself out on the field, but once they did, it wasn't tough to see that there wasn't a side in the country that they couldn't handle. The Timbers just got better and better. 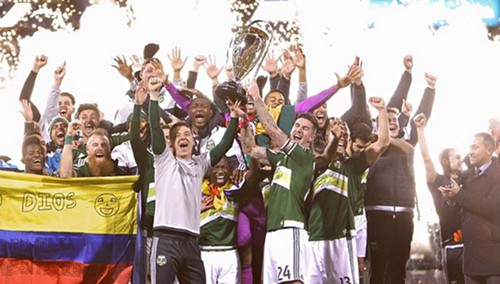