Who Needs Hard Facts? Portland's Cats Are Clearly the Most Photogenic 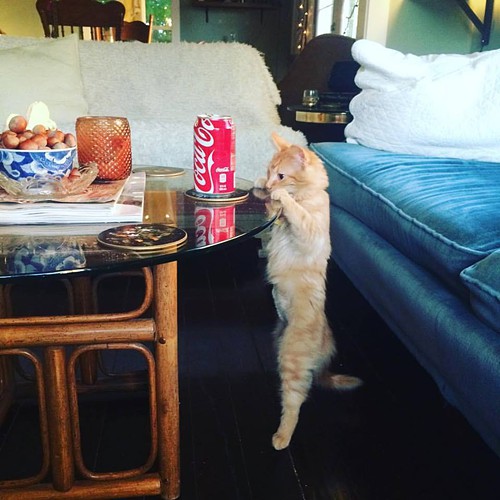 On Tuesday, my insightful and well-read colleague, Rich Smith, books and national politics writer at our sister paper the Stranger, continued our long-running dispute over which Pacific Northwest city can claim the most cat-people. Despite my warranted misgivings, Smith conducted a poll on the Stranger's blog and announces the following in his post:

I see what happened here. When I rightfully disputed Smith's methods, he encouraged carpetbagging Seattleites to contaminate my own Blogtown poll, then resorted to sweeping, poetic statements about feelings. Well, TWO CAN PLAY THAT GAME. In the battle for cat-ownership dominance over the western states, who needs hard facts? We've got a better way of gauging our city's cattitude. Indeed, I've put out a call for our city's best cat glamor shots, and our readers delivered (there's still time to send 'em to us over Facebook or Twitter if you want to take part. You can also adopt a cat today through Multnomah County Animal Services for only $10 in adoption fees!). Seattle may have some impressive numbers (I maintain that poll was rigged), but here are the real champions in the ongoing fight for justice. Their cuteness simply cannot be denied:

Keep being you, Meru.

Dylan Meconis, I've always loved your cartoons, and now I love your cats, too.

And here's my personal favorite, the emoji twins:

Even more cats, plus my own poll results, after the jump! (Did you see that, Seattle? I had to jump this post because there are TOO MANY adorable cats in Portland to fit above the fold.)

Can we count illustrated cats? Grandfathered in, I say!

This one! I AM DEAD:

One of our most prolific commenters makes the only Cats reference I will allow:

From Christen McCurdy, a woman after my own heart:

Here are the results of my poll, by the way. A whopping 42 percent of you are partnered cat-people, thus dispelling the stigmatizing archetype of the single cat person, while 25 percent of you live alone with a cat or seven, 25 percent of you don't have cats at all (*sob emoji*), and an incredible nine percent of you claim to be cats yourselves (I'm assuming these are the carpetbaggers. Hi, Seattleites!).

But cuteness of this magnitude? It can't be reduced to numbers. These cats have got a certain je ne sais quoi that simply cannot be quantified. And this isn't even all of them.

Stream These Indigenous-Made Films from the Portland Film Festival