Remember a couple weeks back when I wrote that the City of Portland was finally about to launch a series of day storage sites for homeless people months late? Then remember how that didn't happen because the driver who was supposed to deliver the modified shipping container got sick?

Well the storage site was supposed to be under the Steel Bridge yesterday. It's still not there, largely because of the problem it's supposed to help ease. City workers didn't realize the cluster of tents that's proliferated under the Steel in recent weeks might stand in the way of delivery, and that their owners might not be keen on moving into the rain when asked to scram. 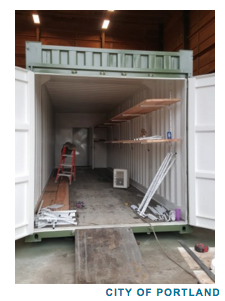 "When the driver showed up yesterday morning, they found campers all over the site where the storage unit was supposed to go," says Jen Clodius, of the city's Office of Management and Finance. "The facilities guy asked them to move. They refused."

Clodius says the city's trying to get people to move elsewhere, and that if they won't officials will post notices and eventually clear out the area—a practice that's being used more sparingly right now than it used to be.

"We'd rather not do that," Clodius says. "To provide that service we need the space."

The storage sites—envisioned as a place where people can unburden themselves during the day without fear of theft—were announced by Mayor Charlie Hales in August, as part of an effort that predated the city's declaration of a housing emergency. At the time Hales' office said the sites would be up by October.