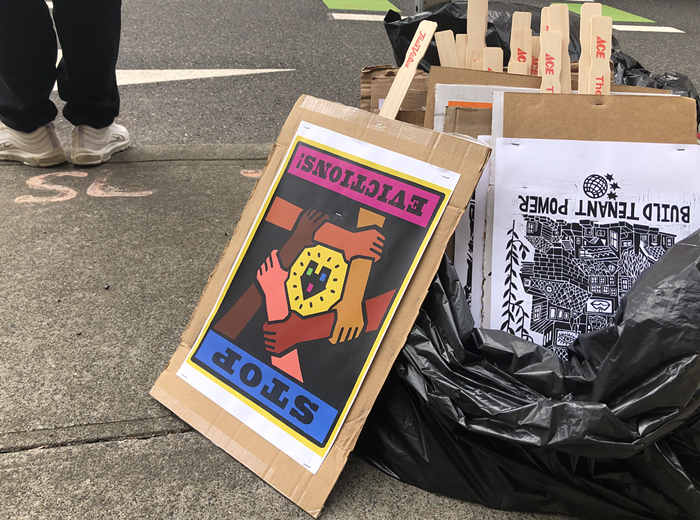 A sign used during an anti-eviction rally in 2021. Alex Zielinski
Ten months after it first began doling out financial aid to Oregonians at risk of eviction, the state's emergency rental assistance program is shutting down its services. On Monday, the state housing department announced that the Oregon Emergency Rental Assistance Program (OERAP) will stop accepting new applications on March 14.

Oregon began distributing federal rent assistance to people unable to pay rent due to the COVID-19 emergency in May 2021. The state initially stopped accepting new applications on December 1, due to a dearth of federal funding, but started back up on January 26 with an influx of funds from the Oregon Legislature. It appears that this time, the application portal will not be re-opening.

Renters are currently protected from being evicted due to non-payment of rent if they have filed an application for rental assistance.

"If a person has previously submitted an application or started an application, the closure will have no impact on you immediately," said Jill Smith, interim director of housing stabilization for Oregon, at a Monday press conference.

While OERAP is the main hub for tenants currently seeking rent assistance, it's not the only resource. When OERAP's portal shuts down next week, renters can still apply for financial assistance through local programs via 211. Tenants can still be protected from eviction if they have a rental assistance application pending—a safeguard that remains in place until September 2022.

This news aligns with another alarming deadline: The state's grace period for tenants with unpaid rent ended February 28. That means that tenants can technically be evicted for back rent they accrued during the pandemic—unless they've applied for rent assistance.

OERAP has distributed at least $289 million in federal rental assistance to Oregonians since it opened its doors in May, according to the program's online dashboard. Those funds have helped those in over 44,500 households pay rent. According to OERAP's data, just over 18,000 Oregonian households are still waiting for the state to process their applications.

While Oregon ranks fourth in the nation for amount of rent assistance it's distributed during the pandemic, OERAP hasn't operated without flaws. Tenants reported waiting months to receive any indication that their rental assistance application had been received, let alone processed. The glitchy delays forced the state to hire a contractor to operate the online portal.

CAT is planning to hold a press conference Wednesday to address the dwindling financial assistance for Oregon renters.