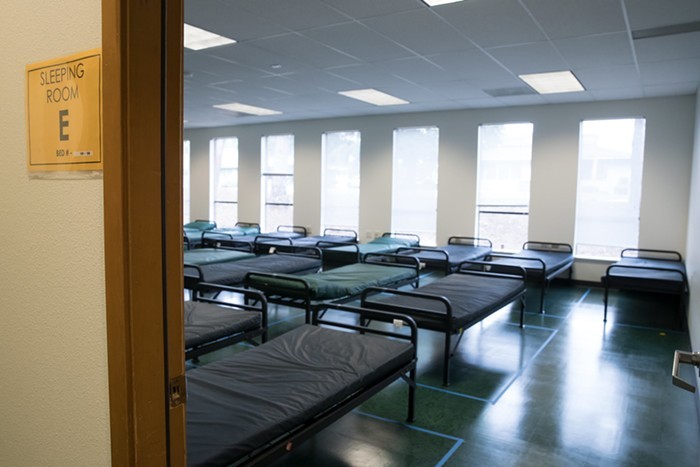 The ballot measure, filed by members of the nascent political organization People for Portland, suggests gutting a brand new Metro tax fund that grants counties money to create and fund programs to help transition unhoused people into permanent housing. Those funds are allowed to be used for any program that helps people leave homelessness behind—whether that's staffing homeless shelters, running an addiction recovery program for previously unhoused renters, or offering rent vouchers for people at risk of eviction. That revenue program, called the Supportive Housing Services (SHS) fund was approved by Metro-area voters in 2020 and only began to distribute among Multnomah, Clackamas, and Washington counties in fall 2021—around the same time that People for Portland formed.

Since its initiation, People for Portland has largely focused its lobbying efforts on chiding local politicians for not eradicating homeless Portlanders from the city's streets and not hiring more cops. In March 2022, the dark money group announced plans to get a ballot measure on the November ballot that would mandate 75 percent of all SHS funds go strictly towards running homeless shelters and would withhold SHS funds from cities that don't enforce their own anti-camping laws.

A Political Action Committee formed to back this ballot measure has gained significant donations from major property development companies, like Schnitzer Properties, Downtown Development Group, Winkler Development Corporation, Killian Pacific, and Apex Real Estate Partners. Despite People for Portland framing the measure as a humanitarian response to homelessness, no homeless service providers or advocates have supported the proposed initiative. The PAC has raised $450,000.

The ballot measure was immediately challenged by lawyers representing Metro, who accused the proposed measure of not passing constitutional muster. That's largely due to the ballot measure missing references to the sections of Metro code it wants to amend, leaving voters with little context about what they'd be voting to change, and because the measure addresses "administrative code," which the Oregon Constitution prohibits ballot measures to tinker with.

During the hearing, Metro's legal representative Jeff Condit argued that the vagueness of the ballot measure appears crafted to mislead voters. Specifically, Condit pointed out that, by not including the details of the original SHS measure, voters wouldn't be able to compare the proposed changes to the original plan.

"I can understand why the petitioners want to sell this to the voters with short soundbites," said Condit, "but these soundbites mislead the voters."

Condit's arguments were supported by lawyers representing Clackamas and Multnomah counties Friday. Attorney Stephen Madkour, representing Clackamas County, said that the decision to pull 75 percent of all SHS funds from the program and redirect them towards homeless shelters is an executive decisions that could only be made by elected officials, like county commissioners.

"The people that make [these decisions], they’re currently on the ballot in Clackamas and Washington and Multnomah county, said Madkour. "And if petitioners want a role in making that decision, then they should seek a role on those commissions."

Aaron Landau, who represented the People for Portland petitioners Friday, pointed to case law that supported the ballot measure's phrasing as-is. Yet it wasn't enough to convince Bushong. In Monday's ruling, he wrote that, while the proposed measure is not an administrative decision, as Metro argued, it fails to meet constitutional standards by omitting the full text of the Metro code it aims to rewrite.

Bushong's ruling is the final decision in this matter—meaning People for Portland can't appeal to a higher court. In a statement emailed to the Mercury, the organization wrote that they are "very disappointed" in the ruling.

"It represents a dramatic change in Oregon’s initiative system that will limit the ability of the people to have a say in their government," the statement reads. "This is not a victory for Metro – they have only succeeded in silencing voters and defending a homeless crisis status quo that is failing everyone. While we evaluate our legal options, our commitment to ensuring safe shelter for everyone who needs it and ending the deadly camping on our streets carries on.”

Metro spokesperson Neil Simon cheered the decision in a Monday media statement, and pointed to the early wins of the SHS fund.

“In the first nine months of Metro’s voter-approved supportive housing service fund, Metro and our county partners have created hundreds of new year-round shelter beds, helped 730 people out of homelessness and into housing, and supported rent assistance for 2,565 families who are trying to avoid homelessness," said Simon. "This important work is making a difference, and our partners in Clackamas, Multnomah, and Washington counties are proving that we can meet this challenge.”

Here Together, the nonprofit that got the SHS on the ballot in 2020, called the ruling "a win for people experiencing homelessness and our entire community" in a press statement co-signed by Coalition of Communities of Color, a nonprofit that supports the SHS fund.

"People for Portland’s political antics have been an intentional distraction from the real work happening on the ground right now to end our homeless crisis," reads the statement. "We need to come together as a community and support the efforts scaling up now to bring our unhoused neighbors indoors and connect them with critical services."