How stupid does Hales think we are? 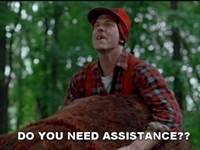 1
Silly blogger, Uber and Weiners go hand in hand.
SuperTrooper on August 8, 2015 at 10:44 AM · Report this
2
char-lie-the-hales and novick, (aka Brutus-the-Thorn) are both up for reelection and the cab companies should find viable candidates and run them. Guys you will have to spend some money but both of these jerks are vulnerable. "Want to take a ride."

1.03.010 Definitions.
A. “City official” means any elected official, employee, appointee to a board or commission, or citizen volunteer authorized to act on behalf of the City of Portland, Oregon.

B. “Ethics” means positive principles of conduct. Some ethical requirements are enforced by federal, state, or local law. Others rely on training, or on individuals’ desire to do the right thing. The provisions of this Chapter which are not elsewhere enforced by law shall be considered advisory only.

1.03.020 Trust.
The purpose of City government is to serve the public. City officials treat their office as a public trust.

A. The City’s powers and resources are used for the benefit of the public rather than any official’s personal benefit.

B. City officials ensure public respect by avoiding even the appearance of impropriety.

C. Policymakers place long-term benefit to the public as a whole above all other considerations, including important individuals and special interests. However, the public interest includes protecting the rights of under-represented minorities.

D. Administrators implement policies in good faith as equitably and economically as possible, regardless of their personal views.

E. Whistle-blowing is appropriate on unlawful or improper actions.

F. Citizens have a fair and equal opportunity to express their views to City officials.

G. City officials do not give the appearance of impropriety or personal gain by accepting personal gifts.

I. Political campaigns are not conducted on City time or property.
1.03.030 Objectivity.
City officials’ decisions are based on the merits of the issues. Judgment is independent and objective.

A. City officials avoid financial conflict of interest and do not accept benefits from people requesting to affect decisions.

B. If an individual official’s financial or personal interests will be specifically affected by a decision, the official is to withdraw from participating in the decision.

D. Intervention on behalf of constituents or friends is limited to assuring fairness of procedures, clarifying policies or improving service for citizens.
1.03.040 Accountability.
Open government allows citizens to make informed judgments and to hold officials accountable.

A. City officials exercise their authority with open meetings and public records.

B. Officials who delegate responsibilities also follow up to make sure the work is carried out efficiently and ethically.

C. Campaigns for election should allow the voters to make an informed choice on appropriate criteria.

D. Each City employee is encouraged to improve City systems by identifying problems and proposing improvements.

E. City government systems are self-monitoring, with procedures in place to promote appropriate actions.
1.03.050 Leadership.
A. City officials obey all laws and regulations.

B. City officials do not exploit loopholes.

F. The City Auditor will publish a pamphlet containing explanations and examples of ethical principles.
Nicholas Caleb on August 8, 2015 at 1:42 PM · Report this
5
I don't care what any rules on ethical says ! Mayor Hales , Novick , Saltzman all should have revealed the obvious conflict of interest ! Let a lone the fact that the taxi industry has never been against competition ! But no cap on uber and lyft instantly created a unfair competition . Mayo Hales is a discrase to the city ! First conflict of interest with airb&b now uber ! Maryor Hales ,Novick ,Sultzman all three if you are such an embarrassment to Portland Oregon !
Wow you three really do believe you are above the law ! All three of you make me sick ,for you set out to abolish the taxi industry to support your
Lobbyist ! If everything was on the up and up let's see it ! Phone records , emails , oh and video of back room deals at dinner ! Can you do that ??
Charleen Hill on August 8, 2015 at 3:54 PM · Report this
6
To be clear, I think a conflict of interest exists.The state rules are too weak and don't cover this sort of thing (of course) and the city's rules do cover the issue, but conveniently aren't enforceable against elected officials.
Nicholas Caleb on August 8, 2015 at 5:05 PM · Report this
7
Typical wonks.
on August 8, 2015 at 6:06 PM · Report this

8
Uber is kind of a pyramid scheme so I'm not worried about it expanding. The more it expands, the more money it loses. (See this: http://gawker.com/here-are-the-internal-do…) It's just too bad existing profitable local businesses get hit by this big shitty tsunami of bad faith before it finally runs its course and recedes.
Grapleberry Assface on August 8, 2015 at 6:46 PM · Report this
9
Don't forget Hockaday! He met with uber most often! The interview on channel 2 with mayor Hales was a joke! He might as well have put on a top hat and cane and did a little side step fit show!
Jen Dye on August 8, 2015 at 7:48 PM · Report this
10
Hales and crew are really par for politics, Portland-style. This city has a hard-earned reputation for a LOT of corruption on the West Coast. No one should be shocked ... and the same kinds of people keep getting voted into office in spite of all that.
drclank on August 8, 2015 at 10:43 PM · Report this
11
If Portlanders would actually vote for someone who didn't suck, they might get decent leadership.

Bud Clark was a freakin' bar owner, and a great mayor. Take a chance next time, folks - don't just write someone off because they're well-integrated into the corrupt political machine and have a big campaign fund.
Chris Bergsten on August 9, 2015 at 6:40 AM · Report this

12
The cab drivers would have gotten a much better reception at city hall if they had just remembered to bring large sums of money as bribes.
JRRTrollkien on August 9, 2015 at 11:05 AM · Report this
13
i'm from chicago and if you think this is municipal corruption take my word for it; you have no idea what actual corruption looks like.
escapefrom chicago on August 11, 2015 at 9:21 AM · Report this