Craig Mitchelldyer/Portland Timbers
The Timbers Army, Emerald City Supporters, Gorilla FC, and MLS supporters around country scored a huge victory on Tuesday afternoon when Major League Soccer (MLS) announced that it has suspended its league-wide ban on the Iron Front symbol for the remainder of the 2019 season.

In addition to the revocation of the ban, MLS announced that it will work with supporters groups and diversity and inclusion experts to amend its Fan Code of Conduct before the commencement of the 2020 season next February.

"We appreciate Major League Soccer's willingness to engage, listen, and learn," the three supporters groups wrote. "We look forward to continuing the dialogue, moving away from direct action in the stands on this issue, and instead focusing our energy on making progress around the table."

MLS's decision to completely cave to the demands of its most ardent supporters brings to an end, at least for now, a story that made headlines in local, national, international press throughout the late summer and early fall.

In March, just before the start of the current season, MLS released a new Fan Code of Conduct banning "political" speech inside of stadiums. The ban specifically targeted the Iron Front, a symbol used to oppose the Nazi regime in 1930s Germany.

Fans protested immediately — arguing the ban on "political" speech was, in reality, a guise under which to arbitrarily ban any speech that made the league and its sponsors uncomfortable.

It argued further that, by banning a visible anti-fascist logo at a time at which the far right is ascendant, MLS was in effect inviting the patronage of people opposed to the principles of inclusion and respect and putting its most vulnerable supporters in jeopardy.

Supporters in the Northwest particularly, led by the Timbers Army, upped their dissent over the summer — mounting a full-scale social media campaign, raising awareness, and protesting, in varied ways, during games.

There were several high points. First, the Timbers Army and traveling Seattle supporters fell silent for the first 33 minutes of their nationally-televised match on August 23 — 1933 being the year that the Nazi Party banned the Iron Front.

Then, two weekends ago, the Sounders' Emerald City Supporters walked out of CenturyLink Field during Seattle's match against the New York Red Bulls in protest of stadium security ejecting a member of the group flying an Iron Front flag in defiance of the league-wide ban.

The significance of Tuesday's outcome is immense. MLS's intent, from the start, was to ride out the backlash to its policy. Less than three weeks ago, asked by ESPN if the league was considering backing down, the league's deputy commissioner and president Mark Abbott responded "no."

On Tuesday, Abbott was announcing the end of the Iron Front prohibition and the establishment of a working group on the Fan Code of Conduct.

The league backed down because it was left with no choice. The Timbers Army's activism was measured, but relentless. They didn't let up. Neither did Seattle's supporters, and nor those supporters who took up the cause in other cities around the country at the risk of being thrown out of games and banned from stadiums for voicing their opposition to oppression. 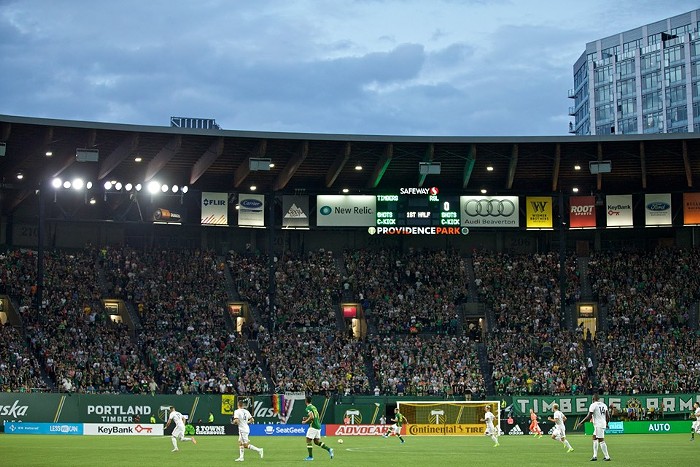 Craig Mitchelldyer/Portland Timbers
Along the way, the Army received a tremendous amount of support from organizations in this city committed to ensuring the safety and security of all marginalized people — from the Oregon chapter of the Council on American-Islamic Relations, to the Western States Center, to the Oregon Jewish Museum.

A number of individuals in power also stepped up. Politicians like Earl Blumenauer and Jo Ann Hardesty made their voices heard, as did players who showed up for work at Providence Park wearing the Iron Front on their chests like Zarek Valentin and Christine Sinclair.

The most powerful alliance of all, though, was the one between Timbers and Sounders fans that led to the 33-minute silence in August. That action, that physical manifestation of a disciplined, committed, and united front, vaulted this protest into the mainstream.

The league didn't crack immediately. But from the moment that both sets of fans exploded into song in the 33rd minute of that game, the wheels were in motion.

Caitlin Murray of Yahoo! Sports reported last Friday that both clubs felt "MLS's New York City-based executives [didn't] fully comprehend the gravity of the issue in their local markets," and had "quietly been nudging MLS" to re-evaluate its stance.

The league's officials left that meeting unwilling to make any committments, citing their desire to consult with other stakeholders, and scheduled a followup conference call for yesterday. On that call, it announced its plan to move forward.

That plan is the result of the elected leadership of the 107ist and other groups doing the hard work of organizing, leading, and negotiating.

It isn't often in American sports that fans can face down the power of a league. But soccer, even here, is a different beast.

Sports can be about more than who wins and loses games. They can be about creating community — about building spaces in a world that is so deeply unsafe for so many people that are welcoming and warm. They can, in a small way, be about justice and peace.

Now, in a sense, it's back to soccer — a playoff push and a high-stakes contract negotiation. In a sense, though, it isn't.

Because when the Iron Front flies tonight at Providence Park, right smack in the middle of the North End, it will be not only an anti-fascist symbol. It will be a testament to the strength and resolve of the thousands of people standing and singing behind it.