The Electric Mike Daisey in Monopoly 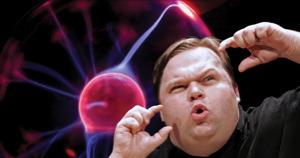 Last I saw the storyteller Mike Daisey perform was the last time he came to Portland: for a run of the monologue that put him on the map, 21 Dog Years, at Portland Center Stage. 21 Dog Years was entertaining enough, if on the fluffy side. It found Daisey wandering about the stage, waxing about his days as a cubicle drone at Amazon.com while living in Seattle during the dot-com boom. A strong topic, surely, though I remember little about the actual content of the monologue--and I even read the subsequent memoir Daisey published about the experience. What did linger in my mind were Daisey's talents as a performer, his enormously expressive face and razor-sharp comic timing.

I believe I will remember Daisey's newer piece, Monopoly (though it's not as new as the nearly brand new piece he will present next weekend, If You See Something Say Something). Daisey has become an even more riveting performer than he was two years ago. No longer a wanderer, he now sits behind a desk, Spalding Gray-style, and speaks directly to you with nothing but a glass of water and a few pages of notes. He is still prone to amazingly hilarious facial contortions and wild, almost Chris Farley-like gesticulations, but with the economy of craft has come an economy of focus. Daisey has broadened his topics but tightened the reigns on his delivery, and the result is a performance that feels both explosive and nuanced.

One gets the feeling Daisey could sit there and talk about any topic you gave him (cat litter, broomsticks, plastic forks) and be entertaining; but Monopoly is also the work of a true writer, an inspiring and compassionate activist, and a relentlessly curious historian. Daisey finds the theme of "monopoly" in corners of life you'd never expect, and thus are surprised, delighted, and sometimes shocked to be informed of. His monologue explores the history of the game of Monopoly itself, the tight-fisted control its distributor Parker Brothers had on the board game market, the exploitation they inflicted on its original creator (an entirely innocent Quaker woman who simply wanted a fun way to educate children about capitalism), and the lies they have printed on the box ever since. It explores the sad and amazing life of Nikola Tesla, a visionary inventor whose ideas met with a lifetime of resistance from the corrupt monopolizer Thomas Edison, who didn't want anyone moving in on his electricity shit. And it explores Daisey's own encounters with monopolies, his awed chagrin at the takeover of his small Maine hometown by Wal-Mart, and his early experience acting with Bill Gates in an industrial video for Microsoft. Each individual story thread is fascinating in its own right and could be served by an entire monologue by itself. Daisey's feat of weaving them together creates, as was the plan, I'm sure, a whole much greater than the sum of its parts. A rich tapestry of historical research, personal memoir, and social commentary that creates the illusion of past and present, of timelessness. The through-line of Monopoly is a story about Daisey's attempts to incorporate an actual Tesla coil into an experimental theater piece he was recruited to perform in New York. Due to its status as a "lightning-throwing death machine," the coil was ultimately denied Daisey (nobody wants dead audience members), but the mere idea of its presence casts a strong metaphorical shadow anyway. He can't end his story with an actual demonstration of its main subject matter, but his words achieve a similar effect to a machine designed, in Daisey's own description, to do no thing but spit huge bursts of random electricity. His storytelling is truly an electrifying experience and will, if nothing else, get you charged up.