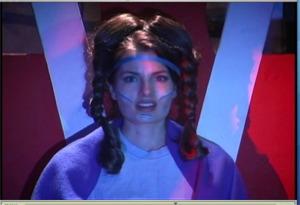 "I really dislike popular culture in most cases," Mike Kelley told a PBS camera crew in 2001. "I think it's garbage, but that's the culture I live in and that's the culture people speak. I'm an avant-gardist. We're living in the postmodern age, the death of the avant-garde. So all I can really do now is work with this dominant culture and flay it, rip it apart, reconfigure it, expose it."

It's the reconfiguration component of this strategy that makes Kelley so compelling, and it lays at the heart of Day is Done, Kelley's nearly three-hour, non-narrative re-imagination of vernacular American theater. Kelley combed high school yearbooks for photographs of assemblies, dress-up days, talent shows, pep rallies, skits, and assorted performances. He then wrote dialogue and musical numbers for each, cast adults in the teen roles, and edited the results into this colossal carnival of pathological, folksy drama.

With chicken dances that teeter on the Brechtian, teen Nazis rapping about their fat fetishes, Satan performing borscht-belt standup, R. Kelly fans fighting with a hillbilly about the exposed tit in her painting of Garth Brooks, a Wiccan zjazzercize routine, and a tween boy overcome with sexual anxiety about a bearded man's "pussymouth," Day is Done is a wickedly outrageous send-up of banal masquerade compulsions and social dramas. It is also, despite the partial cast of outrageous characters listed above, dull at times, and more than a few audience members had split before the "Horse Dance of the False Virgin" even commenced. But in the 48 hours since I watched every last credit roll, the stretches of fidgety tedium are mostly forgotten, and the film's countless wonderful and perverse moments shine through. (This is one of the many ways in which art outperforms both childhood and past romances, where happy memories are always eradicated by the traumatic and/or supremely annoying.)

People will write theses about Day is Done in the near future; there are more allusions to Christian and pagan rituals, musical theater, avant-garde cinema, obsolete social mores, horror flicks, and gender studies to unpack in this film than anyone could possibly sift through. But although it's filled with brainy symbolism (sort of-Satan and the newly-crowned virgin Mary parade around on donkeys at the end), Kelley's lo-fi, Detroit punk roots show through in the film's trippy design, goofy lyrics, and melodramatic performances. For every strand of influence that arrives from the experimental films of Andy Warhol and Jack Goldstein, another strand tethers Day is Done to the dark humor of John Waters and (the weirdest moments of) Mr. Show.
Two arguments for those tempted to leave at intermission: (1) Act Two detours into narrative territory, centering on a tow-headed adolescent who impishly winks for the camera as he crowns the virgin-y winner of the "Pick a Mary" contest. Incensed by the boy's attention-hogging camera-mug, the Holy Mother torments and clubs the tyke in a pounding nightmare scene ripped from the Rob Zombie playbook. The boy escapes to the local barbershop, where he encounters the two creepiest, emasculating barbers imaginable, who inform him that the bathroom isn't "a wigwam to beat your tom-tom," when they sense the kid getting worked up about a customer's pussymouth. So there's that...
And (2), during the credits, Kelley shows the original yearbook photos that inspired the film, and the visual likeness of Day is Done's hallucinatory scenes to the campy school productions is dumbfounding. This recontextualizing of scenes like "Candle Lighting Ceremony (One was Fat, One was Lean)," "Structuralist Mimes," and "Ol' Filthy" was the exact kind of reconfiguration of trash culture that I've come to love Mike Kelley for.