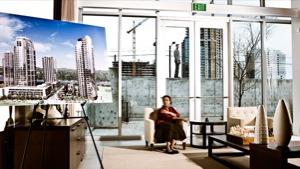 This is too little too late on Sojourn Theatre's excellent BUILT, which ran last week at the South Waterfront, but here's what I say in the paper this week about the show:

As exciting as it is to experience top-tier national and international performing artists, it's also a sheer, smug pleasure to see how well our local acts chalk up. Sojourn Theatre does the Portland art scene proud with BUILT, a site-specific, highly interactive show set in the South Waterfront neighborhood. BUILT takes an open-ended approach to the questions of urban planning, asking the audience to consider how Portland's projected population growth should be handled. Do we build up, cramming in condos until the entire city looks like the South Waterfront, or push our already straining urban growth boundary even farther out? Is it better to live in a brand-new condo with an energy-efficient stove and three-pronged electrical outlets, or a charming, poorly insulated old house with a big porch, a breakfast nook, and an ant problem? What does "better" mean, anyway? Better for whom? The show is interactive but never pushy, as Sojourn ensemble members guide the audience through a series of games, questions, and presentations, all geared toward encouraging audience members to identify the principles that underlie their assumptions about cities and homes, wants and needs. It's a stunningly successful example of theater's power to engage with contemporary issues in a meaningful, potentially transformative fashion. And it's homegrown, so suck it, France.

I'll add that in a festival that can feel very abstruse at times, it was refreshing to see a company doing something more than pushing the boundaries of art for art's sake. This production used theatrical techniques to communicate clearly with the audience about the world we live in. It was relevant, accessible, and genuinely thought-provoking. Not necessarily in its ideas about urban growth (the density versus sprawl conversation is not a new one), but in the ways it asked audience members to consider what really matters to them, by asking deceptively simply questions. "Where do you like to spend your free time? What do you want to be able to say about your city in 20 years?" The audience is asked to pit wants against needs; to consider how their own ability to live where and how they want to might affect others' access to basic needs.