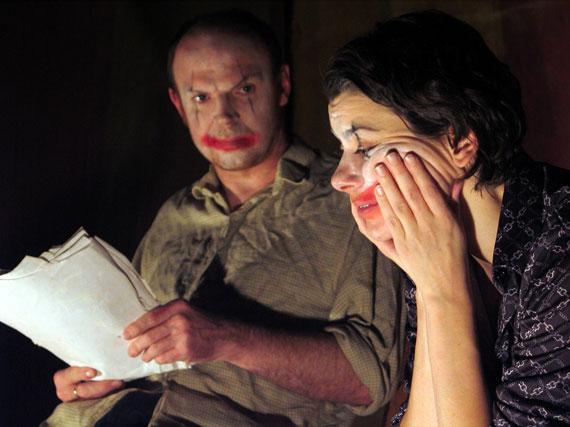 This six-hour ambling little thing was engaging enough for a while, but I don't think it fully shows off the "groundbreaking" aspects of experimental theater maker Tim Etchells. The premise: Etchells and two other dudes sat in a room with some Christmas lights strewn around and stacks of paper with thousands of questions written on them. The men sat or stood, or paced, and just took turns asking each other questions from the papers, and in turn answering them. This they did for six hours, or so I'm told. I wouldn't know because I left after an hour. This you were encouraged to do and I was not violating any rules. I also took pains to come later on in the piece to try and detect if it might be building to anything that wouldn't be detectable in, say, hour #2. It wasn't.

I would say that Etchells' other piece in this year's TBA fest, Sight is the Sense That Dying People Tend to Lose First, was groundbreaking. It was certainly something I hadn't seen before and I am still thinking about it and wanting to talk about it. Quizoola is more kinda arty improv. It has a cool conceit: men on stage asking each other random questions and making up the answers on the spot. But that mildly interesting premise in and of itself isn't enough to get the wheels turning (unlike Sight, in which a man spouted free-association non-sequiters for nearly an hour), and Etchells and his cast aren't good enough performers to make the answers made up on the spot very compelling. Yes, naysayers, I know that they weren't "performing" in the understood sense, but actually truthfully answering the questions--but even then their "real" answers, most of the time, were pretty lame. Etchells himself was the worst answerer of all. He had this contrived, bemused put-uponness that grated after a while, and frequently answered with "I don't know," a choice that made me feel cheated and angry. There was this great streak of questions asked by Jim Fletcher (who was also the performer of "Sight") that went "What cartoon character do you most look like?" "What woman do you most look like?" "What celebrity do you most look like?" and so on, and Etchells just kept saying "I don't know," without even bothering to think about it. Maybe I am being too dismissive of this important work of experimental theater, but I was bothered that the creator of a show that promises to answer questions was, himself, refusing to answer many of the questions. I feel the least he could have done was try and give a solid answer to every single question thrown at him. He also could have been way more energetic, or at the very least not such a drag. He should be happy to be getting paid and flown out to Portland and put up in a hotel room to sit there in another room and answer questions. I mean, that's not such a bad life right? I thought all three of the guys could have just... done more, I guess, with their answers. None of them really had fun with it, and their serious attempts to answer the questions just got tiresome after a while. Why not move around, use visual aids and audience members, draw on a chalkboard...? I don't know, the possibilities are endless. Again, simply answering questions is only kind of a cool idea, and honestly, there are plenty of people I already find interesting answering questions in a public setting (like McCain getting his ass chewed on The View the other day. Want to watch it; haven't gotten to yet); why should I waste six hours on these guys I don't even know if they're not even doing anything cool with their answers? At the very least, let ME do the questioning, or my fellow audience members.
So I thought some opportunities were wasted in this half-baked show, but I also enjoyed parts of it. I got tired of Etchells when he was answering, yet thoroughly enjoyed him as a questioner. Unlike the two other guys, he would really try to pry better answers from the interviewees, and kind of harassed them in ways that were frequently hilarious. He riffed off of questions into new realms of questions and his spontaneity seemed to make the other two genuinely uncomfortable at times. He definitely seemed like the director and visionary of the group. One of the questions he posed to Fletcher was, "Do you think you would be able to tell the signature of someone living from someone who is dead?" I can't remember what Fletcher's answer was, but upon receiving it Etchells made Fletcher describe what sort of experiment would have to be conducted for one to provide the proof of such a skill. Etchells made Fletcher's attempts to describe the experiment drag on for several minutes and that singular moment was one of the funniest, most inspired things I've seen at TBA.

I don't know. I'm still making up my mind about Etchells. Quizoola felt neither inspired nor innovative nor even well executed to me; Sight is the Sense did. I guess he has some books out as well and these I would be interested in reading at some point. He's got a hook in me, but I'm still waiting for the line and sinker.

*One other point of interest: One question asked of Etchells was, "have you killed anyone?" And he said yes(!) that he'd accidentally killed a brother. He didn't expound on this statement and the questioner wasted a golden opportunity and simply moved on without pressing him anymore. Anyone have any insight into this? Was he kidding or serious?